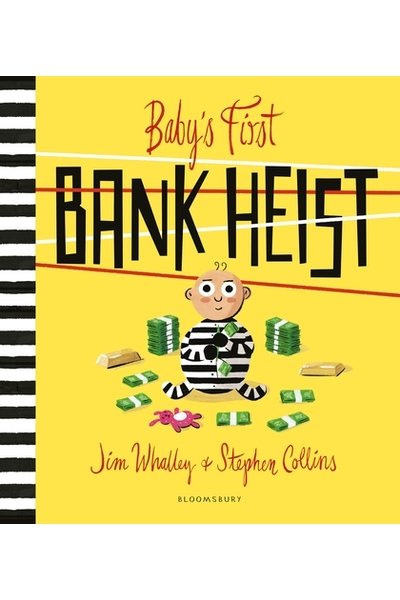 Baby Frank’s parents say that he can’t have a pet – ‘Pets are for older kids’, ‘Be happy with your teddy’, ‘They cost too much to keep’ – which leaves Baby Frank with a BIG problem because he REALLY wants a pet. What’s a baby to do … ? Rob a bank, of course! But will money buy Baby Frank the fluffy pet he so desperately wants?

One of The Observer’s best children’s books of 2018!

Move over, Bonnie and Clyde, because there’s a new criminal mastermind in town … Baby Frank!

Baby Frank’s parents say that he can’t have a pet – ‘Pets are for older kids’, ‘Be happy with your teddy’, ‘They cost too much to keep’ – which leaves Baby Frank with a BIG problem because he REALLY wants a pet. What’s a baby to do … ? Rob a bank, of course! But will money buy Baby Frank the fluffy pet he so desperately wants?

This is a major new partnership – Stephen Collins, cartoonist in Guardian Weekend magazine, and Jim Whalley, an exciting debut author. It’s Burglar Bill for a whole new generation and is perfect for fans of Chris Haughton, Rob Biddulph and Jon Klassen.

He went to UEA with the intention of writing daft stories but got sidetracked into student journalism and academia. He ended up with PhD in Film Studies and got back to writing stories in his spare time. He eventually quit academia because the stories were more fun, a move he justified by also renovating a house. He now lives in that house in Yorkshire with his wife and two children, Fletch and Charlie.

Stephen Collins is an illustrator and cartoonist based in Hertfordshire, UK. His work has appeared in many publications worldwide, and he has a weekly comic in The Guardian Weekend magazine. In 2013 Jonathan Cape published his debut graphic novel The Gigantic Beard That Was Evil, which was shortlisted for the Waterstones Book Of The Year award and an Eisner Award. His collection of strips Some Comics was published by Jonathan Cape in October 2014. He is currently working on his second graphic novel, which will be published by Jonathan Cape in 2018.