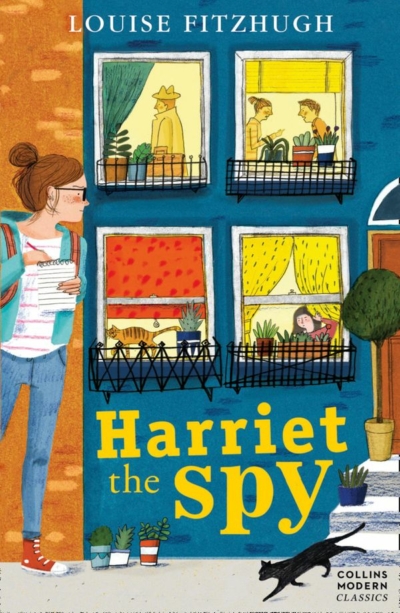 Harriet likes making brutally honest notes about people around her. One day her notes are discovered and what’s worse — she is barred from taking notes.

Sixth-grader Harriet attends school on the New York’s Upper East Side along with her two best pals, Sport and Janie. After school every day, she takes her notebook and proceeds through her spy route. Harriet observes the rich lady who never gets out of bed; the man with twenty-five cats and the Italian family who runs a grocery store. She writes brutally honest notes on them all. Harriet’s downfall is that she also writes notes about people she actually knows…

After a game in the park when her notebook is knocked out of her hands and read by her classmates, Harriet’s innermost thoughts are revealed and she is shunned by all her classmates, who form the Spycatcher’s Club. After her parents find out what’s happened, Harriet receives a final, crushing blow. She is no longer allowed to take notes – her parents, her teacher and even the cook search her every day for a contraband notebook. Harriet’s only consolation is the love and the wise advice of her nanny who manages to get her through this difficult period in her life.

A classic in the US where it was first published and a major motion film from Paramount, Harriet the Spy is a beloved book throughout the world.

The author was born in Memphis, Tennessee in 1928, the only child of attorney Millsaps Fitzhugh and tap-dancer Louise Perkins. Her parents were divorced soon after she was born and she lived with her father, having virtually no contact with her mother. She attended a succession of schools and colleges then travelled around Europe, finally settling in New York and pursuing a career as an artist. She published Harriet the Spy, her first novel, to mixed reviews in 1964, but it has since been recognised as a children’s classic. The Long Secret followed in 1965 and Sport was published posthumously in 1979. She died suddenly in 1974, aged only 46.