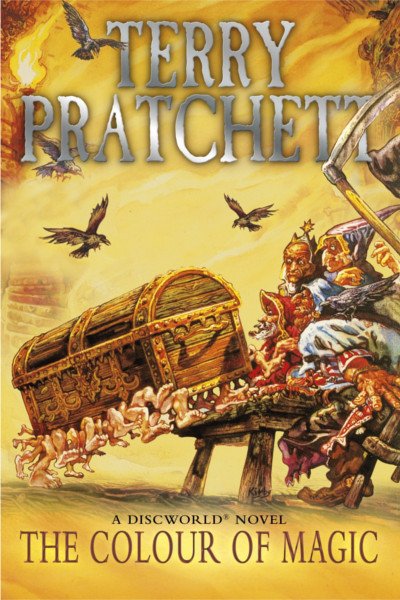 The Colour Of Magic : A Discworld Novels

The Colour of Magic begins Terry Pratchett’s Discworld comic fantasy series, which are set on a flat world shouldered on the top of four elephants resting on a stellar turtle.

There are an infinite number of things out there in that final frontier called space. There are comets whizzing past, asteroids lost cluelessly, invisible black holes which suck light itself into their loins and a turtle called the Great A’tuin, larger than a planet, silently sailing through the abyss, possibly contemplating breakfast. Atop this turtle stand four elephants, as large as moons. On their shoulders rests a flat world called the Discworld. This world is populated by people of every colour, race and magical orientation possible. It has certain laws, which even though they spit in the face of physics, astronomy and evolutionary biology, are quite inflexible. One of them dictates that when a Wizard is about to die, he will be escorted by Death. The Reaper speaks without vocal cords, in a “voice” like the slamming of coffin lids, needing small caps to say what he needs to. (DO NOT TAKE ME LIGHTLY HUMAN, I WILL COME FOR YOU NEXT. HURRY UP, I’M NEVER LATE. YOU, ON THE OTHER HAND, ARE GOING TO BE). There are four main continents on this odd planet, and this story occurs on the Unnamed Continent, where the regularly chaotic life of heroes, Wizards and thieves is upset by the arrival of a strangely clad man. He bears a large trunk with several legs called Luggage which has a mind of his own, and in it, he has a lot of gold. He is Two flower, an odd little man and the Discworld’s first tourist. He quickly hires the failed wizard Rincewind to show him around. However, he might yet regret his choice, for Rincewind was cast out of the greatest institute for magic in the universe: the Unseen Academy. His crime was oddly unique, for he looked into a forbidden book containing a dangerous spell. The spell occupied his entire mind, preventing him from learning any other spells. The spell is so dangerous that all wizards fear it. In fact, it’s so dangerous that no one remembers what it really does!

Sir Terry Pratchett was the acclaimed creator of the global bestselling Discworld series, the first of which, The Colour of Magic, was published in 1983. In all, he was the author of fifty bestselling books. His novels have been widely adapted for stage and screen, and he was the winner of multiple prizes, including the Carnegie Medal, as well as being awarded a knighthood for services to literature. Worldwide sales of his books now stand at 70 million, and they have been translated into thirty-seven languages.