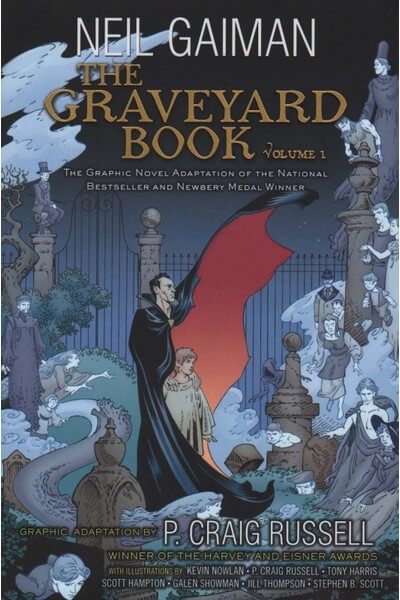 This 2 volume graphic novel in tells the tale of “Bod” Owens. A boy who is protected by ghosts, in a graveyard, from the killer who murdered his entire family.

This is a graphic novel which traces the story of the boy Nobody “Bod” Owens who is adopted and raised by the supernatural occupants of a graveyard after his family is brutally murdered.

The beauty of the story told in the novel is that none of the characters react in a way one would expect them to. Having found ghosts in a graveyard, Bod does not run away screaming. Moreover, the ghosts aren’t scary monsters, instead they are sympathetic to Bod’s predicament and even agree to help raise him.

P Craig Russel is an American comics artist, writer, and illustrator. His work has won multiple Harvey and Eisner Awards. Russell was the first mainstream comic book creator to come out as openly gay.

Kevin Nowlan is an American comics artist who works as a penciler, inker, colorist, and letterer. He has been called “one of the few artists who can be called ‘artists’s artist'”, a master of the various disciplines of comic production, from “design to draftsmanship to dramatics”.

Tony Harris (born 1969) is an American comic book artist, known for his work on series such as Starman, Iron Man, and Ex Machina. He has been nominated for five Eisner Awards.

Scott Hampton is a freelance comic book artist known for his diversity, Hampton has illustrated such iconic properties as Batman, Sandman, Black Widow, Hellraiser, and Star Trek in addition to work on his creator-owned projects such as The Upturned Stone.

He began his career following in the footsteps of brother and fellow comic book creator Bo Hampton. Both Scott and Bo studied under Will Eisner in 1976. Scott’s first professional comics work was the three-page story “Victims” published in Warren Publishing’s Vampirella #101 in 1981. Scott’s work on Silverheels from Pacific Comics in 1983 is regarded as the first continuing painted comic. His latest works include Spookhouse, released in 2004 by IDW Publishing, in which he adapted his favorite ghost stories into sequential form, and Batman: Gotham County Line from DC comics in 2005. Scott is co-creator on Simon Dark with writer Steve Niles for DC Comics.

Jill Thompson is an American comic book writer and illustrator who has worked for stage, film, and television. Well known for her work on Neil Gaiman’s The Sandman characters and her own Scary Godmother series, she has worked on The Invisibles, Swamp Thing, and Wonder Woman as well.

Lovern Kindzierski has been recognized by the Comic Buyer’s Guide survey as one of comics’ most influential colorists in the history of the industry. Lovern won a Wizard Fan Award for his work in 1993 and 1994 as well as a Comic Buyer’s Fan Award in 1998.

Parker is widely known as the artist of MTV’s Beavis and Butt-Head comic book, published by Marvel from 1994 to 1996. He wrote and illustrated his own graphic novel, Deadboy, in 2010.