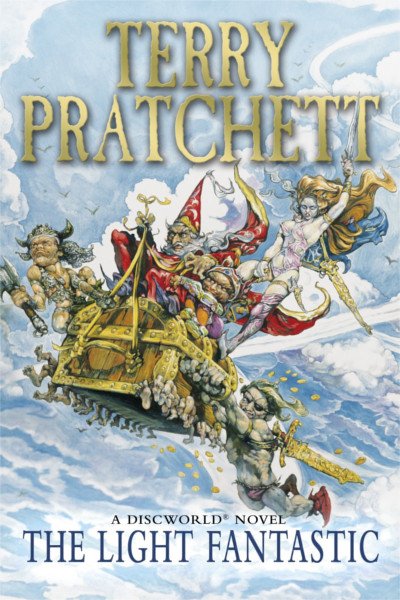 The Light Fantastic : A Discworld Novels

As it moves towards a seemingly inevitable collision with a malevolent red star, the Discworld could do with a hero. What it doesn’t need is a singularly inept and cowardly wizard, still recovering from the trauma of falling off the edge of the world, or a well-meaning tourist and his luggage which has a mind of its own

The Light Fantastic is the second Discworld novel by Terry Pratchett and picks up the story that was begun in The Colour of Magic.

A red star has appeared in the sky and the Discworld is heading right towards it. There is only one person who can save the world; but unfortunately this is the rather inept and cowardly wizard called Rincewind who was last seen falling of the edge of the world.

As The Light Fantastic starts we are once again re-united with Rincewind the wizard, Twoflower the tourist and of course, his luggage.

The writing style is the same as The Colour of Magic with the emphasis heavily on humour. This works most of the time but it did seem at certain points that Pratchett was trying to be too funny, too often. I felt that the storyline sometimes suffered in the search for yet more laughs. This is a small gripe though as there are very few fantasy books that are as well written and enjoyable as this, I really fell in behind Rincewind and sincerely hoped that a happy end and a certain degree of respect was in store for the much happened-upon wizard.

Sir Terry Pratchett was the acclaimed creator of the global bestselling Discworld series, the first of which, The Colour of Magic, was published in 1983. In all, he was the author of fifty bestselling books. His novels have been widely adapted for stage and screen, and he was the winner of multiple prizes, including the Carnegie Medal, as well as being awarded a knighthood for services to literature. Worldwide sales of his books now stand at 70 million, and they have been translated into thirty-seven languages.