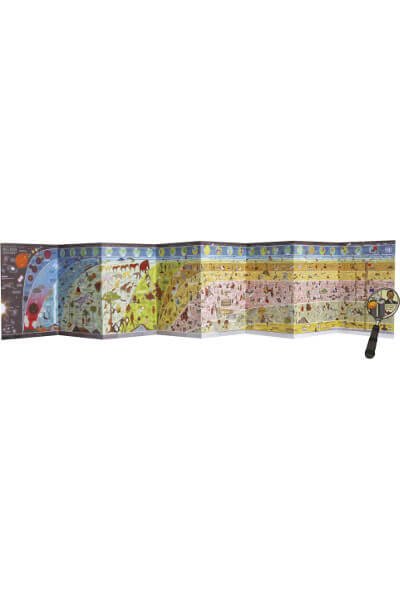 The What On Earth? Wallbook

With more than a thousand illustrations depicting millions of years of evolution, this is an open out wallbook

With more than a thousand illustrations depicting millions of years of evolution, the rise and fall of civilizations, one hundred of the top battles and, on the reverse, the story of our planet, life and people from the Big Bang to the present day, the What on Earth? Wallbook is an exhilarating journey through the past. This ia an open out wallbook.

Christopher Lloyd was born in Dorking, England, in 1968. He became a scholar of History at Peterhouse Cambridge and was awarded a double first class honours degree. He then joined The Sunday Times as Technology and Innovation Editor in 1990. In 1996 he launched the first Internet Editions of The Times and The Sunday Times before becoming editorial director of LineOne, an online service jointed owned by News International and BT. In January 2000, Chris left journalism to become CEO of Oxford-based educational publishing company Immersive Education. Then, in 2005, he and his wife began home educating their two children. In 2006 the whole family went on a four-month Grand Tour of Europe in a campervan. It was during this trip that Chris decided to become an author and came up with the idea of a holistic world history that would reconnect natural and human history into a single illustrated narrative. What on Earth Happened? The Complete Story of Planet, Life and People form The Big Bang to the Present Day was published by Bloomsbury in 2008. It has since been translated into 15 languages worldwide. A sequel called What on Earth Evolved? 100 Species that Changed the World (also published by Bloomsbury) traces the story of life on Earth from its origins to the present day. In February 2010 Chris launched his own publishing company – What on Earth Publishing Ltd – a collaboration between Chris and Beckenham-based illustrator Andy Forshaw. The company’s first product, The What on Earth? Wallbook, was published in October 2010. It is an innovative and detailed illustrated history of the world from the beginning of time to the present day displayed on a 2.3 metre-long timeline that can be read like a book or hung on a wall. There are now five Wallbooks in the series, the latest being the What on Earth? Wallbook of Shakespeare. Chris is the great nephew of the English gardening guru Christopher Lloyd of Great Dixter. Chris lectures extensively all over the UK and abroad in schools, museums and literary festivals. He can be contacted at [email protected]