Goan Anthropology: Mothers, Miracles and Mythology describes how Catholic and Hindu mother goddesses blended over time and how a miracle revealed social divides in Goan village as well as religious synthesis.

In Goan Anthropology: Festivals, Films and Fish, Robert S. Newman writes of the many aspects of Goa’s transformation as well as Goa’s contemporary image in the wonder world of Bollywood films. 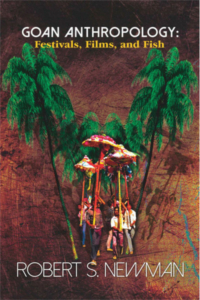 Goan Anthropology: Mothers, Miracles and Mythology:
Goan Anthropology: Mothers, Miracles and Mythology describes how Catholic and Hindu mother goddesses blended over time and how a miracle revealed social divides in Goan village as well as religious synthesis. What did a colonial official in the 1890s see in the same place that Newman researched nearly a century later? Myths of Goa have loomed large for centuries. They change with time, but did they ever reveal the “Real Goa”? Did Goans ever have a role in synthesis as most people speak different languages in different social situations – Konakni, English, Marathi, Hindustani, or Portuguese. Though part of the work presented here was done in 1970s and 1980s, it is valuable as social history because it underlies the ongoing process of change in Goa.

Goan Anthropology: Festivals, Films and Fish:
In Goan Anthropology: Festivals, Films and Fish, Robert S. Newman writes of the many aspects of Goa’s transformation as well as Goa’s contemporary image in the wonder world of Bollywood films. That image explains why millions of Indian tourists have headed to Goa. He compares Western hippies with Goan religion pilgrims, and talks about Goa’s image on postage stamps, the conflict between trawlers and traditional fisherman along the coast, a faith healing cult with links to both Hindu and Catholic traditions, and the colorful religious festivals in Goa and beyond. These are only some of the topics covered in a book which reveals the wide variety of cultural activities and socio-political questions ion one of India’s most beautiful states.

Robert S. Newman was the first to apply modern anthropological theory and writing to the study of Goan society, his main arguments being that Goa has never been part of Portugal, but rather a slightly Lusitanized region of India and that Goan culture must be seen as a syncretic Hindu-Catholic one. A second conclusion is that the same “Green Revolution” process that increased grain production in India, was also successfully applied to fishing in Goa (and elsewhere in India) but that the human and ecological price paid has been extremely high. Overall, he attempts to show that popular religion in Goa, as separate from the classical versions of Catholicism and Hinduism, is a rich synthesis of the two in which goddesses can be seen (for example) as either Shantadurga or Our Lady, in which Hindus attend certain Catholic feast day ceremonies and Catholics make donations to Hindu temples.