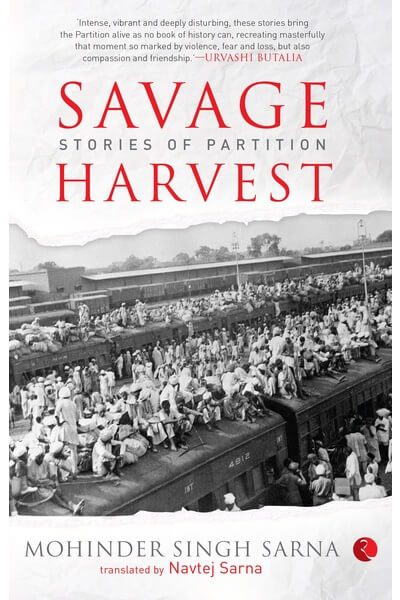 This collection of stories set during the time of the Partition of India in 1947 illustrate the truth that hate and violence have no religion, and that courage and compassion are to be found among people of every faith.

‘The season of sickles and scrapes had passed; this was the time of axes and spears…it had been a strange harvest.’

A brave father prepares to sacrifice his son; a poet returns to his home across the border to find his books intact among strangers; a young man challenges the neighbourhood rogue to a horse-riding bet to rescue a captive girl; a middle-aged man outs a murderer from among his well-behaved guests at a social gathering; a wife’s faith destroys the hatred in her husband’s heart; and, when humanity is under threat, a dog lays down his life to protect his mistress. The stories in this powerful collection, by one of the most respected names in modern Punjabi literature, record epic moments of survival in the sea of violence that overwhelmed north India in 1947.

Translated by Navtej Sarna, these stories illustrate the truth that hate and violence have no religion, and that courage and compassion, too, are to be found among people of every faith. A harrowing record of the horrors of Partition, Savage Harvest is also a poignant tribute to the human spirit—to men and women who will wage their all in defence of humanity.

Mohinder Singh Sarna (1923–2001) moved to Delhi from Rawalpindi after the tumultuous partition of India, and joined the Indian Audit and Accounts Service in 1950. In a writing career spanning six decades, Sarna produced several volumes of poetry, short stories and novels, many of which have been widely translated into other Indian languages and made into telefilms. Sarna’s work has received critical acclaim, and is prescribed in university syllabi in India and abroad. He was the recipient of several prestigious awards, including the Sahitya Akademi award. He was married to noted Punjabi translator and poetess Surjit Sarna.

Navtej Sarna is an Indian diplomat. He is the author of the novels The Exile and We Weren’t Lovers Like That; the short-story collection Winter Evenings; the non-fiction works The Book of Nanak and Folk Tales of Poland; and a translation of Guru Gobind Singh’s Zafarnama.