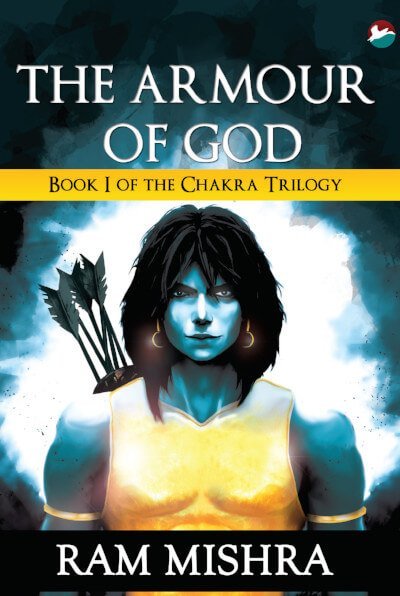 The Armour of God: Book I of the Chakra Trilogy

The Armour of God, the first book in The Chakra Trilogy, narrates the tale of ‘The Protector’, born to protect the most powerful weapon ever known to mankind.

A great warrior, born wearing divine armour, walked on earth during the Dwapara Yuga five thousand years ago. Admired for his bravery, courage and generosity, the warrior was subjected to severe humiliation, and fought against misfortune his entire life. It was only after his death that he achieved what he wanted most: everlasting honour.

In modern times, the life and world of a young lad turns upside down as the truth about his birth and his destiny is revealed. The Armour of God is the first book in The Chakra Trilogy. It narrates the tale of ‘The Protector’, born to protect the most powerful weapon ever known to mankind from falling into the hands of creatures who could wipe humans off the face of the Earth. These creatures belonged to a race that sought universal dominance and revenge from the Gods who had driven them away from the Earth five thousand years earlier.

The book not only raises questions, but also provides possible explanations to long unresolved mysteries. It attempts to provide a historical, and a scientific perspective to what is often referred to as Indian mythology. The Armour of God is an effort which combines science and fantasy to clear the web of misplaced beliefs that have infiltrated and drenched the fabric of modern thought.

Ram Mishra is a sales and marketing consultant by profession, working for a leading Indian company. Writing is his passion. Ram graduated as an engineer and went on to pursue a post graduate programme in management from an elite B-School in India. He intends to share his ideas with book readers across India and the world with an intention to invite their thoughts.

Ram’s first novel, The Victims of Desire, a crime thriller, was published in 2009. The book was based on a diamond heist. The Armour of God Ram’s second novel, is the first book in “The Chakra Trilogy“. The book, and the trilogy, intends to provide possible explanations to long unanswered questions, and to explore the secrets of India’s ancient and glorious past. The book introduces a simple protagonist, whose complex past has shaped his destiny.