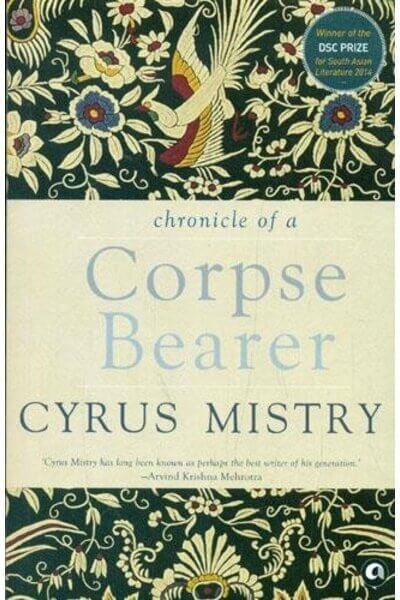 Chronicle Of A Corpse Bearer

This intense tale of tragic love, delicately brings out the subtle tinges of the humiliation experienced by the corpse bearers and the ever-rampant existence of untouchability.

Chronicle of a Corpse Bearer is a novel derived from a true story. When the whole community of the corpse bearers is eschewed and isolated from society, Phiroze Elchidana, son of a highly respected Parsi priest, falls in love with Sepideh, daughter of an old corpse bearer. Corpse bearers, pretty much an invisible community in Bombay, are those whose job is to carry dead bodies to the Towers of Silence. This book is an intense tale of tragic love, which also delicately brings out the subtle tinges of the humiliation experienced by the corpse bearers and the ever-rampant existence of untouchability.

At the very edge of its many interlocking worlds, the city of Bombay conceals a near invisible community of Parsi corpse bearers, whose job it is to carry bodies of the deceased to the Towers of Silence. Segregated and shunned from society, often wretchedly poor, theirs is a lot that nobody would willingly espouse. Yet thats exactly what Phiroze Elchidana, son of a revered Parsi priest, does when he falls in love with Sepideh, the daughter of an aging corpse bearer…

Derived from a true story, Cyrus Mistrys extraordinary new novel is a moving account of tragic love that, at the same time, brings to vivid and unforgettable life the degradation experienced by those who inhabit the unforgiving margins of history.

The author began his writing career as a playwright, freelance journalist and shortstory writer. His play Doongaji House, written in 1977 when he was twenty-one, has acquired classic status in contemporary Indian theatre in English. One of his short stories was made into a Gujarati feature film. His plays and screenplays have won several awards. His novel, Chronicle of a Corpse Bearer (2012), won the DSC Prize for South Asian Literature 2014.