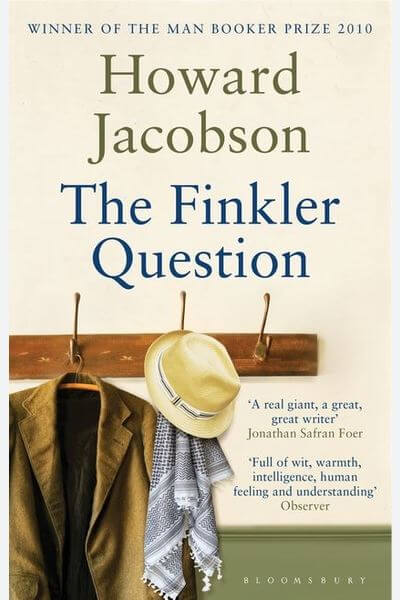 Winner of the Booker Prize in 2010, The Finkler Question touches on a number of other vital and compelling topics: men and their relationships to each other; male competition; the insecurity of middle aged men and women; infidelity; and multiculturalism in the modern society.

Julian Treslove is a 49 year old Gentile living in present day London whose life has been a series of disappointments: he has movie star good looks but can’t seem to sustain a relationship with a woman for more than a few months; he was let go from his production job at the BBC for his overly morbid programs on Radio 3, a station known for its solemnity; and he has fathered two boys, who ridicule and despise him. Even worse, he compares poorly to his friend, rival, and former school classmate Sam Finkler, a pop philosopher, radio and television personality, and author of best selling books such as The Existentialist in the Kitchen and John Duns Scotus and Self Esteem: A Manual for the Menstruating, which have made him wealthy and respected, with a beautiful wife and three successful children.

However, the one thing that Julian desires most of all is to become Jewish, like Sam and their mutual friend and former teacher Libor Sevcik, a Czech whose tell all biographies of Hollywood starlets such as Greta Garbo and Marlene Dietrich have earned him fortune and notoriety. Julian refers to Jews as Finklers, after his friend, and frequently wonders how they think, why they are smarter and more successful than him, and how he can understand and be more like them. The three men engage in frequent discussion about Israel, Palestine, and Jewish life in London; understandably, Julian is always an outsider, despite his desire to become one with his friends.

The Finkler Question touches on a number of other vital and compelling topics: men and their relationships to each other; male competition; the insecurity of middle aged men and women; infidelity; and multiculturalism in the modern society. The author deftly dwells on these topics throughout this brilliant novel, which he has filled with humor and pathos.

Adapted from a review of the book on goodreads.com

The editor was born in Bombay in 1938. At nineteen, he had published his first book of Poems, A Beginning, which won the Hawthornden Prize, at that time the most coveted literary award in England. His second book of verse, Poems (1960), became the Autumn Choice of the Poetry Book Society. Apart from these, he has published eight other collections of poems and over twenty works of prose, including a biography.