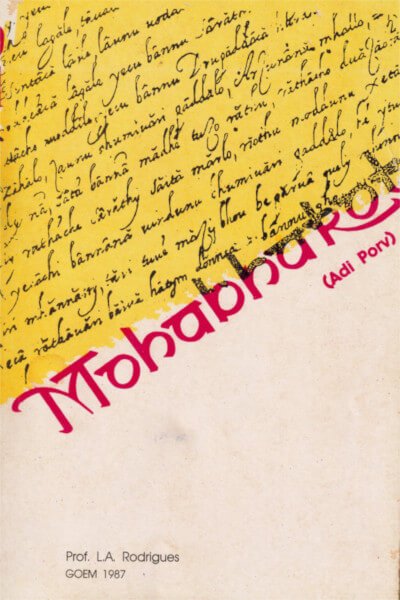 The discovery of old Konkani manuscripts embodying tales from the Ramayana and the Mahabharata firmly negated the belief that Konkani did not have a tradition of adaptations of the great Indian epics. These epic stories from the two massive manuscripts were reconstructed in modern Devanagari and edited for publication by Olivinho Gomes. A part of them constitutes this book, the ’Adi parva’, recast in modern Roman script and edited with notes, glossary and explanation by Lourdino Rodrigues and published in 1987.

It was long believed that Konkani did not have a tradition of adaptations of the great Indian epics of the Ramayana and the Mahabharata, like its other sister languages of the Indo-Aryan family. However, the discovery of old Konkani manuscripts embodying tales from these two epics in a massive form in the Public Library of Braga (since transferred to the Braga District Archives) in northern Portugal in the middle of the present century, dispelled that notion. These tales are lodged in Codex 771 and Codex 772 respectively containing the Mahabharata and Ramayana portions in a general manner, of the said Archives in hand-written form in a phonetically written Roman script. It is believed that they are the creative works of a group of Konkani writers of native stock from Quelossim, Salcete, Goa, whose names are not clearly mentioned in their text, but they are attributed to Krushnadas Saama Kellosikar and his companions, as in a companion Codex 773 in Marathi, containing the Krishna Charitra Katha, the name of that author and his companions like Vishnudas Nama, Namadeva, the real names being Vaishampayana, Changa Nivrutti Das and Sukha Indra figure prominently. These works were reportedly dictated by Konkani Goan Pandits from a manuscript with them supposedly in the Kandevi/Goy Kanadi script, and transliterated into a Roman script based on the Portuguese phonology of the time, that is the turn of the sixteenth century, by foreign missionaries, and which served as a base for their study of the Konkani language and composition of literary works in it in later times.

The Codex 771 contains 23 stories in Konkani prose, the earliest such prose in Indian languages except Sanskrit, almost all taken from the Mahabharata epic, divided into different ‘parvas’ or chapters. It has 839 pages of big format, but one of its parvas, the Bhisma parva of about 125 pages, is found repeated, and a few repetitions are noted here and there. The author’s name that figures prominently in this manuscript is that of Vishnu Das Nama, a pseudonym of Vaishampayana, who also takes the pennames of Namadeva and Parmeshvaracho Sharangata Nama. He has to his credit 11 parvas covering over 475 pages. In it also appears the name of Changa Nivrutti Das with two parvas of 134 pages. Then there is also Sukha Indra with one parva, the ‘Adi parva’, describing the genealogy of the Kauravas and the Pandavas. and one story, all in 126 pages. There are eight incomplete stories without any author’s name covering around 105 pages.

The Codex 772 contains 16 stories, and five that amount to a type of fable in Konkani prose, consisting of a total of 443 pages of big format. All these stories are from the epic, Ramayana, except two which are taken from the Mahabharata, one subscribed bv Vishnu Nama and the other by Sukha Indra, the latter being the author of the ‘Adi parva’ which is also to be found in Codex No.771. None of the Ramayana tales bear any author’s name, except one which has been subscribed by one Sadashiva. It gives the impression that perhaps these tales were related or rather dictated orally by some native Hindu Pandits, maybe by Sadashiva himself, and written in the phonetically-written Roman script by the Portuguese missionaries in their own hand in a system of transliteration corresponding nearly to the Devanagari script.

These epic stories from the two massive manuscripts were reconstructed in modern Devanagari and edited for publication by Olivinho Gomes. A part of them constitutes this book, the ’Adi parva’, recast in modern Roman script and edited with notes, glossary and explanation by Lourdino Rodrigues and published in 1987. A Devanagari version of it, with certain modifications in its transliteration, etc. and notes, glossary, edited by Pratap Naik, S.J. has appeared in 1990.

Prof. Lourdino A. Rodrigues, of modest and simple nature, in spite of all his erudition and intellectual achievements and high recognition on the part of his students and intelligentia, has remained a poor and simple man, but with a right to gratitude from Konkani students and scholars alike. He was born in 1916 at Carmona, the birth place of freedom fighters and Konkani lovers. He himself is a freedom fighter and nationalist on his own right. He was the mentor and animator of Konkani journal ‘Chabuk’ of Bombay, and as journalist he wrote regularly on Konkani papers. He was a well known professor of Portuguese and French in Dhempe College. As an associate member of Institute Menezes Braganza, he wrote scholarly articles on Konkani Linguistics in well acclaimed Bulletin of the Institute. He contributed on article on Portuguese Literature to Marathi encyclopedia. He is working in collaboration with Prof. Rocky Miranda of the Minnesota University, U.S.A., on the Portuguese Konkani and Konkani Portuguese Vocabularies of Fr. Diogo Riberio. He has published a Konkani grammar in devnagari, and also alphabet A of a Konkani -English Dictionary in collaboration with Fr. Aguiar. At present he is working on Konkani codices 771 and 772 found in the library of Braga (Portugal) and preparing a new edition of Konkani-English dictionary based on Diogo Riberios’s lexicon of 16th century. He is an undisputed authority on “Pramann Konkani” of 16th-17th century which was followed all over Konkan. He has many articles and works ready which are yet to be published.