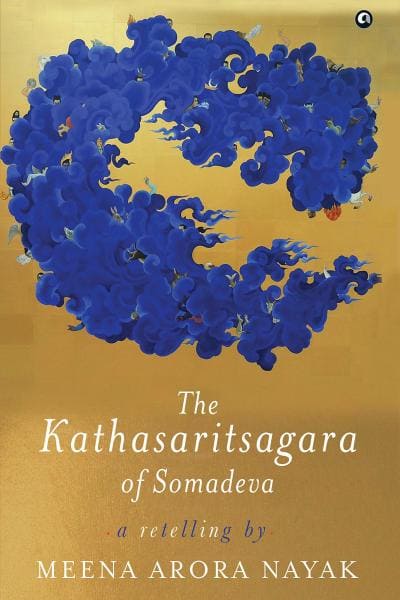 This is a retelling of one of India’s greatest epics, the Kathasaritsagara, written by Somadeva during the Lohara Dynasty period of Kashmir.

One of India’s greatest epics, the Kathasaritsagara is thought to have been compiled around 1070 CE by Somadeva Bhatt, during the reign of Raja Ananta of the Lohara dynasty of Kashmir. Even though this extraordinary work is one of the longest creations in Indian and World literature, It is considered to be only a small part of an even longer work called Brihatkatha, composed by Gunadhya in a lost language known as Paisachi. Somadeva collected and retold the stories of the kathasaritsagara in Sanskrit to entertain Raja ananta’s wife, suryavati. This masterpiece is foundational for many of India’s best-loved folk tale traditions, such as Vetala Pachisi and Panchatantra, and it has influenced many of the world’s best-known classics, including One Thousand and One Nights, The Decameron, and The Canterbury tales. In addition, contemporary writers like Salman Rushdie have drawn from the work in Books like Haroun and the sea of stories. Within its vast frame, the Kathasaritsagara has several hundred stories that owe their origin to India’s limitless storehouse of myth, scripture, and folklore. Snake gods rub shoulders with enchanted princesses, and heroic warrior-kings battle Rakshasa tall as the sky and wide as the ocean. Celestial apsara seduce handsome princes, wise prostitutes counsel errant husbands, fools parley with ghouls, and riddlers and talking monkeys pace through the tales. Here you will find talking birds and swindlers, beggars and conjure, sages and polymaths, divine beings and semi-divine vidyadharas, yakshas and Yoginis, walking corpses and sleeping giants, and a host of other remarkable creatures mingling with ordinary men and women in a multitude of magical kingdoms, enchanted islands, and forbidding forests in the three worlds–heaven, Earth, and the Netherworld. And through this skein of stories contained in eighteen books, Somadeva spins tales of love, infidelity, death, rebirth, sacrifice, fulfilment, courage, cowardliness, honesty, untruth, separation, togetherness, joy, sadness, and much, much more. The central story of this epic revolves around the son of the famed Raja Udayana, Naravahanadatta, and his marital quests, in the course of which he acquires numerous wives, encounters a host of memorable characters, and wins supremacy over the mystical Vidyadharas. Meena Arora nayak’s brilliant new retelling of the Kathasaritsagara, the first major rendition of the epic in a quarter century, closely follows the adventures of Naravahanadatta and brings these ancient tales to new and enthralling life.

The author has written The Blue Lotus: Myths and Folktales of India; three novels, Endless Rain, About Daddy, and In the Aftermath; a children’s book, The Puffin Book of Legendary Lives; and a monograph, Evil in the Mahabharata. Her stories are included in the anthologies The City of Sin and Splendour and Enhanced Gravity.