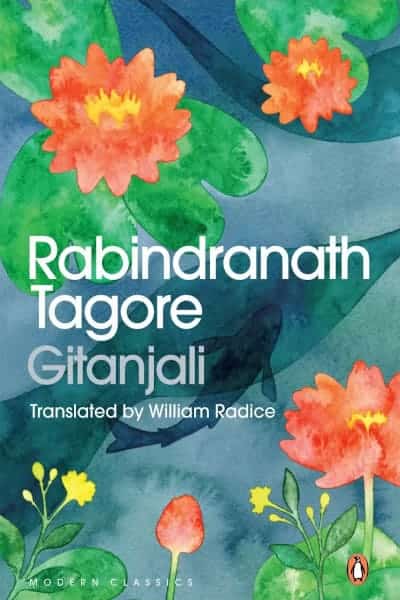 Gitanjali is a collection of poems and song’s which Tagore describes as “revelations of my true self”. This translation renders with precision the poetic rhythm and intensity of the Bengali originals.

Described by Rabindranath Tagore as ‘revelations of my true self’, the poems and songs of Gitanjali established the writer’s literary talent worldwide. They include eloquent sonnets such as the famous ‘Where the mind is without fear’, intense explorations of love, faith and nature (‘Light, oh where is the light?’) and tender evocations of childhood (‘When my play was with thee’).

In this translation, William Radice renders with beauty and precision the poetic rhythm and intensity of the Bengali originals. In his arrangement of Tagore’s original sequence of poems alongside his translations, Radice restores to Gitanjali the structure, style and conception that were hidden by W. B. Yeats’s edition of 1912, making this book a magnificent addition to the Tagore library.

The author was a key figure of the Bengal Renaissance. He started writing at an early age and by the turn of the century had become a household name in Bengal as a poet, a songwriter, a playwright, an essayist, a short story writer and a novelist. In 1913 he was awarded the Nobel Prize for Literature and his verse collection Gitanjali came to be known internationally. At about the same time he founded Visva-Bharati, a university located in Santiniketan, near Kolkata. Called the ‘Great Sentinel’ of modern India by Mahatma Gandhi, Tagore steered clear of active politics but is famous for returning his knighthood as a gesture of protest against the Jallianwala Bagh massacre in 1919. Tagore was a pioneering literary figure, renowned for his ceaseless innovations in poetry, prose, drama, music and painting, which he took up late in life. He died in 1941.

The translator is also a poet. He is well known for his translations of the poems, stories and plays of Tagore.