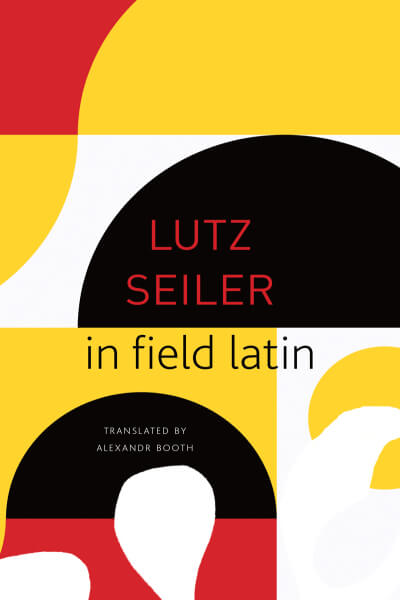 In Field Latin is a collection of contemporary poetry broken into 7 sections on various themes like nature, weather and the passing of time.

Lutz Seiler grew up in the former East Germany and has lived most of his life outside Berlin. His poems, not surprisingly, are works of the border, the in-between, and the provincial, marked by whispers, weather, time’s relentless passing, the dead and their ghosts. It is a contemporary poetry of landscape, fully aware of its literary and non-literary forebears, a walker’s view of the place Seiler lives, anchored by close, unhurried attention to particulars.

The author is widely acknowledged as one of the major German poets of his generation. He was born in 1963 in Gera, a town in the eastern part of the state of Thuringia in the former German Democratic Republic. He underwent training as a mason and a carpenter and completed mandatory military service. After studying in Halle and Berlin, in 1997 he became the literary director and occupant of the Peter Huchel Museum outside of Potsdam, the most recent caretaker in a line extending from the poet Huchel himself (who permanently left the GDR in 1971) to the poet and translator Erich Arendt. Mr. Seiler has published over six volumes of poetry, short-stories and essays. His many prizes include the Dresden Poetry Prize (2000), the Bremen Prize for Literature (2004), the Ingeborg Bachmann Prize (2007), and, most recently, the Fontane Prize (2010). He was writer-in-residence at the German Academy in Rome in 2010 and at the Villa Aurora in Los Angeles in 2003. In addition, he has been elected a member of the Saxon Academy of the Arts, Dresden, and the Academy of Arts, Berlin. In Field Latin is his most recent book of poetry.

The transloator is also an author. He is the recipient of a 2012 PEN Translation Fund grant for his translations of Lutz Seiler. For Seagull Books, he has translated Moor by Gunther Geltinger, In Field Latin by Lutz Seiler, A Nameless Day by Friedrich Ani, Love Writ Large by Navid Kermani, Gramsci’s Fall by Nora Bossong and Poetry and Time by Max Neumann and Joachim Sartorius.