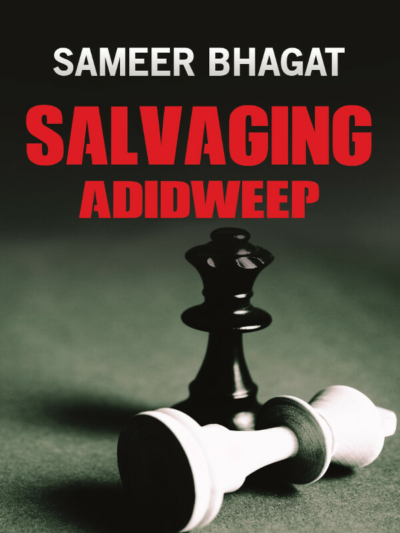 Salvaging Adidweep is set in the civil-war zone of Adidweep.It unfolds in the streets of New Delhi, when an assailant shoots and grievously injures, the Kargil war hero, Surya, social worker Pragati, journalist Satya, and professor Rishi.

Salvaging Adidweep is set in the civil-war zone of Adidweep.

It unfolds in the streets of New Delhi, when an assailant shoots and grievously injures, the Kargil war hero, Surya, social worker Pragati, journalist Satya, and professor Rishi.

As they battle to stay alive, we retrace their steps and peek into their dramatic lives. A few months earlier, the tyrannical Chief Minister of Adidweep had pushed them into a corner, forcing them to join hands and challenge his political authority in an electoral battlefield. Besides, the four had their own personal reasons for partaking in this crusade.

It was an audacious political battle against the most powerful opponent possible, a suicidal mission with armed left-extremists lurking in the background. However, for these courageous commoners it was a noble cause worth fighting for – as they attempted to salvage Adidweep. Only time would reveal whether they would succeed.

Born in Ranchi, Sameer Bhagat spent his formative years in The Scindia School, a boarding school in Gwalior. After graduating from Hans Raj College, University of Delhi, he joined the State Bank Group and worked there for almost a decade. Subsequently, he quit his job and returned to his roots in Jharkhand to work among his people. One of his online ventures, Tribal Stuff, promotes traditional tribal arts and handicrafts; in addition he runs a popular blog, Focus Magazine. He lives in a conflict-ridden home state, part of the much-dreaded Red Corridor of India. His deep understanding of the ground reality has helped him to write this contemporary political drama.

This book is printed upon order, and hence will take a week to ship. The time taken for you to receive it after the book is shipped will depend upon the mode you choose, while completing your purchase. The rates applicable for each mode are different.