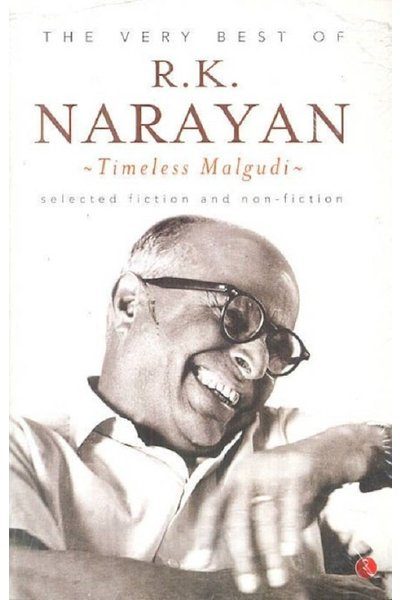 Timeless Malgudi brings together a selection of the best and the most enduring of R.K. Narayan’s fiction and non-fiction.

Over a career spanning seven decades, R.K. Narayan, easily one of the most influential and important writers of India, populated the fictional town of Malgudi with a host of unforgettable characters: Swami and his gang of friends, the Talkative Man, Raju the guide and Sampath the printer, among many others. These characters have carved out a place for themselves in popular imagination and live on, still fresh and endlessly entertaining, many decades after they first appeared.

Timeless Malgudi brings together a selection of the best and the most enduring of R.K. Narayan’s fiction and non-fiction. The Guide examines, with wit and irony, how a man becomes a godman. The story ‘A Horse and Two Goats’ describes an attempt at cross-cultural communication which goes haywire, with hilarious consequences. The excerpt from My Days, Narayan’s autobiography, paints a poignant picture of the author’s childhood while the ‘Misguided “Guide”’ is a cynical, sharply written chronicle of the making of the film Guide, based on his novel. Also included in this volume are excerpts from the travelogue My Dateless Diary, and a brilliant retelling of the Tamil epic Silappadikaram.

Catering both to Narayan aficionados and to readers who have not yet been introduced to his work, Timeless Malgudi is as much a showcase of Narayan’s writing as it is a celebration of Malgudi, the town which time does not touch.

R.K. Narayan was born in Madras in 1906. His first novel, Swami and Friends and its successor, The Bachelor of Arts, are both set in the fictional town of Malgudi. Apart from these, Narayan wrote twelve other novels. Narayan has also authored five collections of short stories, two travel books, two volumes of essays, a volume of memoirs, and re-told legends and epics. Narayan, who lived to be ninety-four, died in 2001.