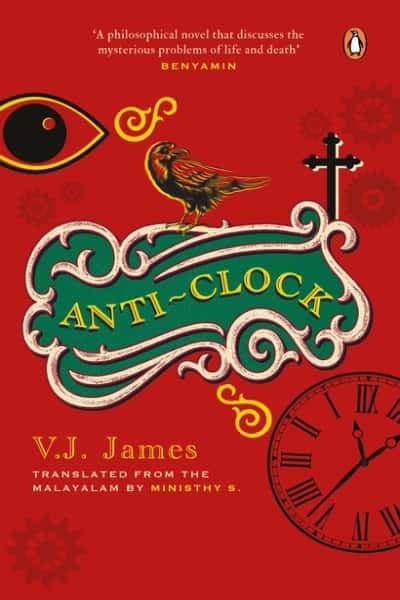 Hendri, the coffin maker, has one goal in life: to see the dead body of his nemesis Satan Loppo being lowered into the coffin. A battle is inevitable when Loppo desires to possess the Anti-Clock — a device to turn back time.

Hendri, the coffin maker, has one goal in life: to see the dead body of his nemesis Satan Loppo being lowered into the coffin he has painstakingly carved. For it was Loppo who defiled his beloved Beatrice, and let loose his hellhound Hitler upon Hendri, giving him a permanent limp.
From inside his coffin shop, Hendri watches the world go by even as he prepares to deliver justice upon Loppo. He is confronted by the son of his best friend becoming enamoured with Loppo’s wealth, Loppo’s evil designs towards the hills of Aadi Nadu, and his own Christian guilt that regularly comes to haunt him. Until he meets Pundit, a 112-year-old watchmaker who was part of Bose’s Indian National Army and is building an ‘Anti-Clock’, which can turn back time. When Loppo too hears of the Anti-Clock and desires to possess it, the inevitable battle becomes a reality.

The author writes in Malayalam. Born and brought up in Changanacherry, Kerala, he currently resides in Thiruvananthapuram. An engineer by profession, he worked at Vikram Sarabhai Space Centre. His debut novel Purappadinte Pusthakam was awarded the DC Silver Jubilee Award (1999), Malayattoor Prize and Rotary Literary Award. Other awards include the O.V Vijayan Award and Thikkurissi Award for Anti-Clock, and the Thoppil Ravi Award, Kerala Bhasha Institute Award, Kerala Sahitya Akademi Award, Basheer Puraskaram and Vayalar Award for Nireeshwaran. The English translation of Chorashasthram was shortlisted for the Atta Galatta Bangalore Literature Festival Book Prize. The Malayalam film Munthirivallikal Thalirkkumbol starring Mohanlal and Meena is an adaptation of his short story Pranayopanishath. Along with six short story collections, his major works include Purappadinte Pusthakam, Chorashasthram, Dathapaharam, Leyka, Ottakkaalan Kakka, Nireeshwaran and Anti-Clock.