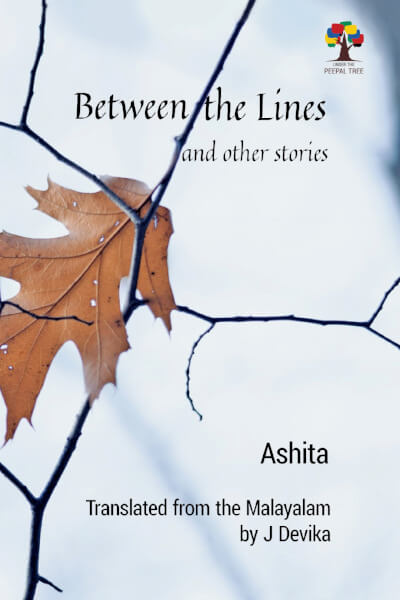 Between the Lines and Other Stories

Ashita’s stories are unique for their extreme economy of words that communicate brilliantly the claustrophobic nature of confined domestic spaces in which educated women in Kerala found themselves.

Between the Lines and Other Stories is a collection of short stories by Ashita, one of Malayalam’s finest women writers. She is widely recognized as an author who initiated themes which came to be handled in bolder and more politicized terms by explicitly anti-patriarchal writing in Malayalam in the 1990s and thereafter. Ashita’s stories are unique for their extreme economy of words that communicate brilliantly the claustrophobic nature of confined domestic spaces in which educated women in Kerala found themselves, from which there was seemingly no escape. Her writing does not merely talk about the oppressiveness of confinement, rather it communicates the experience of silence, repression, and sheer boredom, and transports the reader into that dark, still world within the four walls of the respectable middle-class home in which everyone was expected to be happy and contended.

Ashita was a Malayalam-language short story writer, poet, novelist, children’s author and translator from the state of Kerala, India. She was born in Pazhayannur, and completed her schooling from cities like Delhi and Bombay and obtained her graduation and Master’s degree in English literature from Maharaja’s College, Ernakulam. Ashita’s writing has been widely appreciated as the precursor of more full-fledged feminist fiction of the 1980s, and her unique style has been the subject of much analysis in Malayalam literary criticism. Her short stories have been translated into German and many Indian languages and she has contributed to almost all genres of literary writing in Malayalam. She has also been the recipient of several prestigious prizes, including the Kerala Sahitya Akademi’s prizes for short story, and children’s writing.

J Devika is a feminist researcher and teacher at Centre for Development Studies, Kerala, who has contributed to the understanding of the history of gender, development, politics, and culture of modern Kerala. Her work is interdisciplinary and she brings to bear her training as a historian on contemporary issues. She is interested in opening up the boundaries between academic and public and pedagogic discourses, the social sciences and humanities, and between English and Malayalam. Devika also translates literature and social science between Malayalam and English, and often writes for children, besides offering commentary on contemporary politics in Kerala on www.kafila.online.