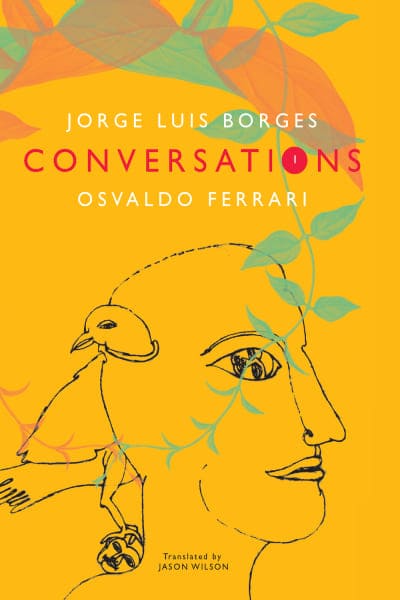 This is the first book in a series of Conversations on a variety of fascinating topics between Jorge Luis Borges — the master Argentinian writer — and Osvaldo Ferrari.

Buddhism, love, Henry James, and the tango are just a few of the topics Jorge Luis Borges, Argentina’s master writer, and extraordinary conversationalist, discusses in the first volume of the remarkable new series, Conversations. The eighty-four-year-old blind man’s wit is unending and results in lively and insightful discussions that configure a loose autobiography of a subtle, teasing mind. Borges’s favorite concepts, such as time and dreaming, are touched upon, but these dialogues are not a true memoir, they are unrestricted conversations about life at present.

The Argentine short-story writer, essayist, poet and translator contributed immensely to twentieth-century literature, and more specifically to the genres of magical realism and fantasy. As he progressively lost his sight–he became completely blind by the age of fifty-five–the darkness behind his eyelids held enchanting imagery that translated into rich symbolism in his work. The inner workings of his curious mind are seen vividly in his conversations with Ferrari, and there’s not a subject on which he doesn’t cast surprising new light. As in his tale “The Other,” where two Borgeses meet up on a bench beside the River Charles, this is a dialogue between a young poet and the elder teller of tales where all experience floats in a miracle that defies linear time.

orge Luis Borges, the famous Argentine short-story writer, poet and philosopher, began life as a poet with Fervor de Buenos Aires(1923). In the 1940s, he published his great story collections Ficciones (1944) and The Aleph (1949). Following his blindness in 1955, he turned again to traditional poetry, based on meter, and published several volumes, starting with the mixed prose and verse El hacedor (1960), followed by several collections.