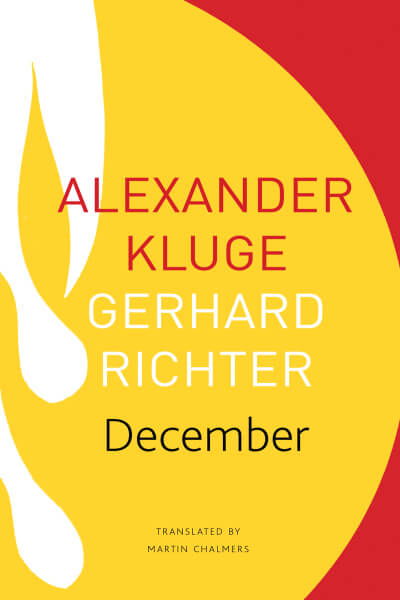 December is a collection of 39 stories accompanied buy 39 snow-swept photos of the darkest month of the year.

In the historic tradition of calendar stories and calendar illustrations, author and film director Alexander Kluge and celebrated visual artist Gerhard Richter have composed December, a collection of thirty-nine stories and thirty-nine snow-swept photographs for the darkest month of the year. In stories drawn from modern history and the contemporary moment, from mythology, and even from meteorology, Kluge toys as readily with time and space as he does with his characters. In the narrative entry for December 1931, Adolf Hitler avoids a car crash by inches. In another, we relive Greek financial crises. There are stories where time accelerates, and others in which it seems to slow to the pace of falling snow. In Kluge’s work, power seems only to erode and decay, never grow, and circumstances always seem to elude human control. When a German commander outside Moscow in December of 1941 remarks, “We don’t need weapons to fight the Russians but a weapon to fight the weather,” the futility of his struggle is painfully present. Accompanied by the ghostly and wintry forest scenes captured in Gerhard Richter’s photographs, these stories have an alarming density, one that gives way at unexpected moments to open vistas and narrative clarity. Within these pages, the lessons are perhaps not as comforting as in the old calendar stories, but the subversive moralities are always instructive and perfectly executed.

The author is one of the major German fiction writers of the late twentieth century and an important social critic. As a filmmaker, he is credited with the launch of the New German Cinema movement. His awards include the Italian Literature Prize Isola d’Elba (1967), and almost every major German-language literary prize, including the Heinrich von Kleist Prize (1985), the Heinrich Böll Prize (1993) and the Schiller Memorial Prize (2001). He has also received the Georg Büchner Prize (2003), Germany’s highest literary award.

The translator (1948–2014) was also an editor who lived in Berlin. He translated works by Elfriede Jelinek, Thomas Bernhard, Peter Handke, Hans Magnus Enzensberger, and Alexander Kluge, among others. In 2004, he won the prestigious Schlegel-Tieck Prize for his translation of The Lesser Evil: The Diaries of Victor Klemperer, 1945–59. He was married to author and translator Esther Kinsky.