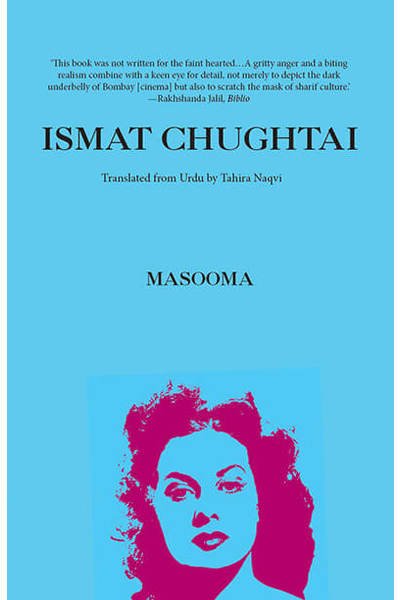 The journey of Masooma the innocent one a young woman from a once wealthy family of Hyderabad who arrives with her mother in Bombay to become a star, but is soon embroiled in a game of exploitation, lust and treachery.In an effort to survive brutal and rapacious men producers, actors, pimps and procurers the mother and daughter descend into a world of corruption and moral decay themselves.

Set in the film world of the 1950s, this powerful novel may well be regarded as a work that celebrates all the talents of the legendary Ismat Chughtai a writer who was brave, frank, provocative, entertaining even when she told the darkest of stories, and impossible to ignore. It traces the journey of Masooma the innocent one a young woman from a once wealthy family of Hyderabad who arrives with her mother in Bombay to become a star, but is soon embroiled in a game of exploitation, lust and treachery. She is transformed into Nilofar, a commodity that can be easily bought and sold; and in an effort to survive brutal and rapacious men producers, actors, pimps and procurers the mother and daughter descend into a world of corruption and moral decay themselves.

Ismat Chughtai was born in 1915 in Badayun and was the first Muslim woman in India to acquire both a BA degree and a degree in teaching. She is counted among the earliest and foremost women Urdu writers. She focused on women s issues with a directness and intensity unparalleled in Urdu literature among writers of her generation. Author of several collections of short stories, three novellas, a novel, Terhi Lakir (The Crooked Line), and Kaghazi Hai Perahan (The Paper-thin Garment), a memoir. With her husband, Shahid Latif, a film director, whom she married against her family s wishes in 1942, she produced and co-directed six films, and produced a further six independently after his death.

Tahira Naqvi, a translator of Urdu fiction and prose, taught English for twenty years, has taught Urdu at Columbia, and now heads the Urdu programme at New York University. She has translated Ismat Chughtai s short stories, her novel and her essays. She has also translated the works of Khadija Mastur, Sa dat Hasan Manto and Munshi Premchand. Naqvi also writes fiction in English. She has published two collections of short fiction, Attar of Roses and Other Stories of Pakistan and Dying in a Strange Country. Her short stories have been widely anthologised.