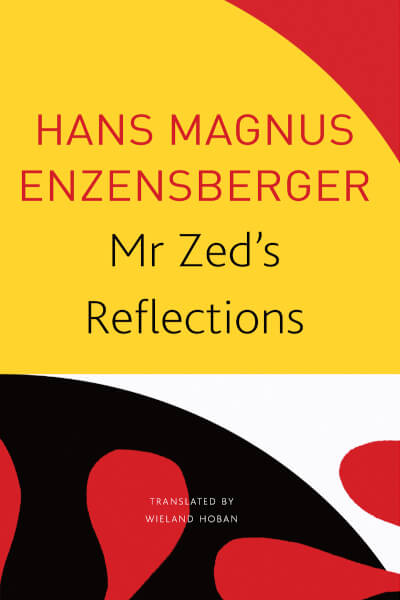 In this novel by a leading German intellectual, Mr Zed a park-bench philosopher, shares his wisdom with any passers-by who would listen.

Any new book by poet, essayist, writer, and translator Hans Magnus Enzensberger, one of the most influential and internationally renowned German intellectuals, is cause for notice, and Mr Zed’s Reflections is no exception. Every afternoon for almost a year, a plump man named Mr Zed comes to the same spot in the city park and engages passers-by with quick-witted repartee. Those who pass ask, who is this man? A wisecracker, a clown, a belligerent philosopher? Many shake their heads and move on; others listen to him, engage with him, and, again and again, end up at the same place. He doesn’t write anything down, but his listeners often take notes. With subversive energy and masterful brevity, Mr Zed undermines arrogance, megalomania, and false authority. A determined speaker who doesn’t care for ambitions, he forces topics that others would rather keep to themselves. Reluctant to trust institutions and seeing absolutely nothing as “non-negotiable,” he admits mistakes and does away with judgment. He is no mere ventriloquist dummy for his creator—he is too stubborn for that. And at the end of the season, when it becomes too cold and uncomfortable in the park, he disappears, never to be seen again. Collected in this thought-provoking and unique work are the considerations and provocations of this squat, park-bench philosopher, giving us a volume of truths and conversations that are clear-cut, skeptical, and fiercely illuminating.

The author often considered Germany’s most important living poet, is also the editor of the book series Die Andere Bibliothek and the founder of the monthly TransAtlantik. Seagull Books has published many of his books, including, most recently, Tumult, Panopticon, and Anarchy’s Brief Summer. His works have been translated into over 40 languages.

The translator was born in London in 1978. He began studying music and German at the University of Bristol, then studied composition at the Frankfurt Academy of Music and Performing Arts with Isabel Mundry, Hans Zender and Gerhard Müller-Hornbach. He has won various German composition prizes. In addition to his work as a composer he is also a freelance translator, primarily of writings in the fields of music and philosophy, including several books by Theodor W. Adorno and Peter Sloterdijk, as well as numerous essays for collections and journals; he has also published musical analyses and other theoretical texts. He has been a regular interpreter at the Darmstadt International Summer Course for New Music since 2000 and the Donaueschingen Music Days since 2011.