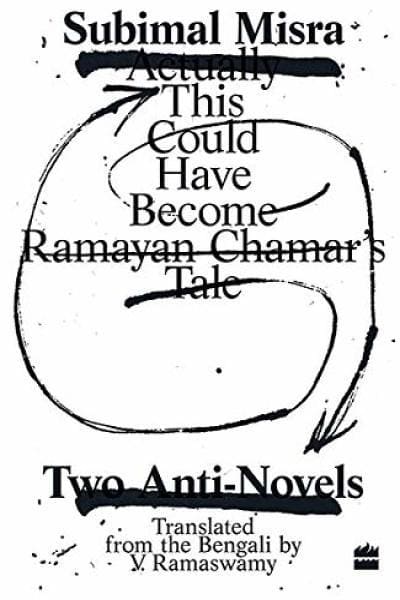 This collection of two anti-novels, translated from Bengali, looks straight into the dark heart of the middle class and uses startling techniques to undercut the pretensions and hypocrisies by which we live.

This Could Have Become Ramayan Chamar’s Tale is a novella about a tea-estate worked turned Naxalite named Ramayan Chamar, who gets arrested during a worker’s strike and is beaten up and killed in custody. But every time the author attempts to write that story, reality intrudes in various forms to create a picture of a nation and society that is broken down, and where systemic inequalities are perpetuated by the middle- and upper-classes who are either indifferent or actively malignant. When Colour Is A Warning Sign goes even further in its experimentation, abandoning the barest pretence of narrative and composed entirely as a collage of vignettes, dialogue, reportage, autobiography, etc.Together these two anti-novels are a direct assault on the ‘vast conspiracy of not seeing’ that makes us look away from the realities of our sociopolitical order. In V. Ramaswamy’s translation, they make for difficult, challenging but ultimately immensely powerful reading.

The author has been called the only anti-establishment writer in Bengali. Influenced by the cinema of Sergei Eisenstein and Jean-Luc Godard, Misra experimented with the use of film language in Bengali writing even as he made William Burroughs’s cut method his own. With his very first collection of stories, Haran Majhi’s Widow’s Corpse or the Golden Gandhi Statue (1971), he signalled his departure from conventional narrative fiction. He has written exclusively for little magazines. Misra’s stories, novelettes, novellas, novels, a play, essays and interviews comprise over thirty volumes. Cupid’s Corpse Does Not Drown in Water, an experimental prose work, was published in 2010.

The translator lives in Kolkata. He is engaged in a multi-volume project to translate the short fiction of Subimal Misra. The Golden Gandhi Statue from America: Early Stories, published in 2010, was shortlisted for the Vodafone Crossword Book Award. He was awarded the Sarai Fellowship for Non-fiction Writing in 2013.