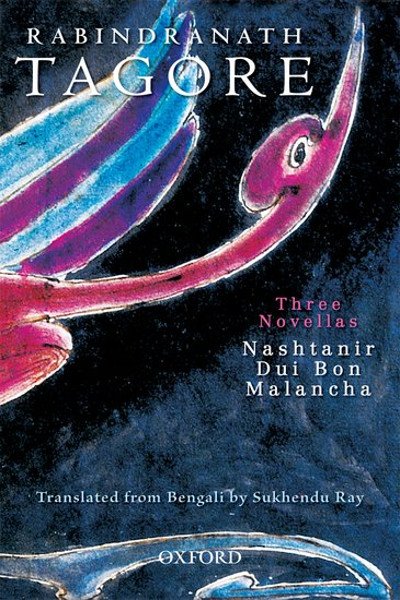 This volume includes three novellas by Rabindranath Tagore, who remains the greatest influence on Bengali language and literature today. The first novel, Nashtanir (‘Broken Home’), was published in 1903 after a gap of three decades, Dui Bon (‘Two Sisters’) and Malancha (‘The Garden and the Gardener’) were published in 1933 and 1934 respectively.

In these three works, Tagore depicts the plight of Charulata, Urmimala, and Sarala by placing them in a new world where they are perceived as rational and desiring subjects constrained by domestic norms. Forbidden relationships mark the central narrative of Nashtanir, Dui Bon, and Malancha. While Nashtanir portrays the love between an elder sister-in-law and a younger brother-in-law, Dui Bon deals with the relationship between an elder brother-in-law (sister’s husband) and sister-in-law (wife’s sister). In Malancha, we have an affair between a married man and a distant cousin who comes to look after his wife and the garden that he and his wife had tended. In all three works, however, ultimately the bond of marriage wins and remains, at least technically, unbroken. But an incessant desire to express their voice outside the four walls, a sense of mental void due to marital obligation, and an illegitimate longing for an extra-marital love bind our protagonists in a common thread and form a unique sisterhood. There is also the understated theme of the emergence of the ‘new woman’-a woman with personality and thoughts of her own.

A native of Calcutta, India, who wrote in Bengali and often translated his own work into English, Rabindranath Tagore won the Nobel Prize for Literature in 1913—the first Asian person to receive the honor. He wrote poetry, fiction, drama, essays, and songs; promoted reforms in education, aesthetics and religion; and in his late 60s he even turned to the visual arts, producing 2,500 paintings and drawings before his death.

Sukhendu Ray is a Fellow of the Institute of Chartered Accounts, England and Wales. He retired as Managing Director of Keen Williams Ltd. and is currently on the boards of several companies.