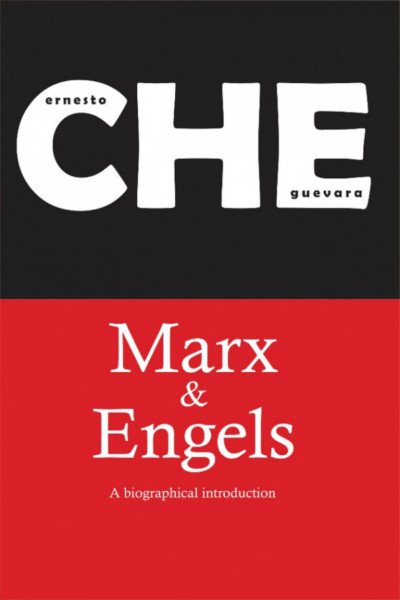 Marx and Engels : A Biographical Introduction

A Biographical Introduction by Ernesto Che Guevara is an interesting and thought-provoking book that aims to revive the interest of its readers, in the history and principles of Marxism.

Che Guevara, being a firm believer in the doctrine of Marxism, begins this book by providing his readers with some very valuable insights into the principles of Marxism. He speaks at length on the life and works of Karl Marx and Friedrich Engels, while aiming to captivate the hearts and minds of the people with their thought-provoking theories. The setting on Marxism as a theory by means of which Ernesto found answers was followed by the continual presence of Marx himself.

This is the major reason behind Che returning to Marx at the peak of his revolutionary and intellectual development, as he was able to find answers to the important aspects of socialism, and the shifting towards it, which is key to transforming human beings themselves. Che comments at length on the numerous principles of humanism, as incorporated by Karl Marx. He laments on the fact that Marx’s heartfelt message for the betterment of humanity has now been transformed into a mere idol made of stone.

A Biographical Introduction provides the readers with tremendous amounts of information about not only Marx and Engels, but even about the author himself, who has been a staunch follower of the principles of Marxism. The author also provides the readers with a list of books that he recommends for those who would like to know more about Marx and Engels, and also about the history and principles of Marxism. This piece of literature was intended to serve as a rough draft for an economy book in the future, which Che thought was required.

Guevara was born on the 14th of June, 1928, in Rosario, Santa Fe, Argentina. Guevara began to participate in Chess tournaments locally at the age of 12, after being taught by his father. He also had a great interest in poetry and literature, his home contained over 3,000 books. He completed his degree in Medicine, after which he began to tour Latin America. During his time there, he began to take note of the poverty, sickness and hunger faced by the natives, and decided to step into the political arena of armed struggle to do something for those people. Time Magazine has placed him in their list of the 100 Most Influential People in the 20th Century. Guevara was executed on the 9th of October, 1967.