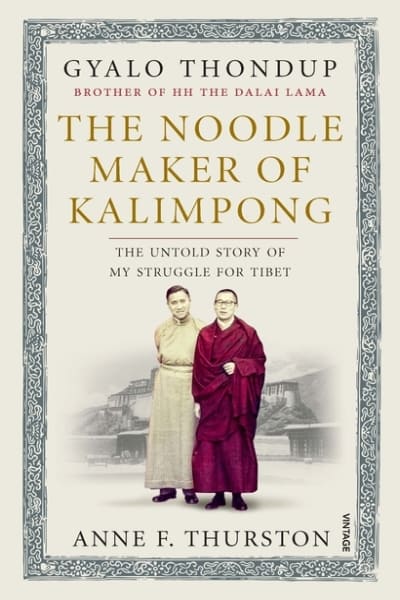 The Noodle Maker Of Kalimpong

This is the untold story of Tibet—a compelling account of conspiracy, covert organizations and international intrigue.

This is the untold story of Tibet–a compelling account of conspiracy, covert organizations and international intrigue. It includes hitherto classified information and photos gleaned from privileged sources. Central to these revelations is a seemingly simple man: Gyalo Thondup, the Dalai Lama’s elder brother. After Tibet was overrun by the Chinese in 1951, Thondup served for decades as His Holiness’s special envoy—the trusted interlocutor between his country and foreign leaders including Chiang Kai-shek, Jawaharlal Nehru, Zhou Enlai and Deng Xiaoping. He has acted as a go-between for the CIA and Tibetan freedom fighters. He has recruited for the resistance and negotiated with China. His has been a vital role in the history of modern, tragedy-ridden Tibet.

Now, together with Anne F. Thurston, Gyalo Thondup shares his experiences for the first time. He offers an intimate portrait of the Dalai Lama and their immediate family, and reveals his secret international role. No one has a better grasp of the ongoing great game as the divergent interests of China, India, Russia and the United States continue to play themselves out over the Tibetan plateau, and no one is better placed to offer his vision for the future of Tibet in the twenty-first century.

Gyalo Thondup was born in 1929 and is the second-eldest brother of the 14th Dalai Lama. During his political career, he served, among other things, as the secret go-between for the CIA and the Tibetan resistance fighters and later as a chief political strategist as well as the Dalai Lama’s official envoy to the international community.

Anne F. Thurston is a China specialist and senior research professor at the Johns Hopkins University’s School of Advanced International Studies. She was the coauthor for the international bestseller, The Private Life of Chairman Mao, and is the author of Enemies of the People and A Chinese Odyssey. She lives in Alexandria, Virginia.