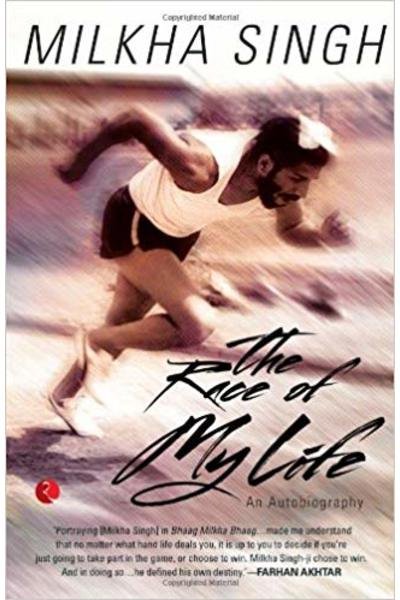 The Race of My Life: An Autobiography by Singh Milkha

Powerful and gripping, The Race of My Life documents the journey of an impoverished refugee who rose to become one of the most towering figures in Indian sports.

Milkha Singh has led a life dominated by running, running, running? From a boy who narrowly escaped death during Partition (most of his family was not so lucky), to a juvenile delinquent who stole and outran the police, to a young Army recruit who ran his very first race to win special privileges for himself (a daily glass of milk). After that first race, Milkha Singh became an athlete by default. And what followed was the stuff legends are made of.

In this remarkably candid autobiography, Milkha Singh shares the amazing highs of winning Indias first ever gold in athletics at the Commonwealth Games, the unbridled joy of being hailed as the Flying Sikh in Pakistan, as well as the shattering low of failure at the Olympics.

Simple, yet ambitious; famous, yet grounded; temptations all around him, yet remaining celibate so he could focus on racing; a rich and beautiful girl who was desperate for him, yet fighting the world to marry his lady love, Nimmi. Even as the on-field drama found its way into his personal life, Milkha was a man who defined his own destiny. And yet, for a man whose life was dominated by sports, he continues to remain disillusioned with the way sports is run…

Powerful and gripping, The Race of My Life documents the journey of an impoverished refugee who rose to become one of the most towering figures in Indian sports.

Milkha Singh (birthdate uncertain, between 1929-1935),[a] also known as The Flying Sikh, is an Indian former track and field sprinter who was introduced to the sport while serving in the Indian Army. He was the only Indian athlete to win an individual athletics gold medal at a Commonwealth Games until Krishna Poonia won the discus gold medal at the 2010 Commonwealth Games. He also won gold medals in the 1958 and 1962 Asian Games. He represented India in the 1956 Summer Olympics in Melbourne, the 1960 Summer Olympics in Rome and the 1964 Summer Olympics in Tokyo. He was awarded the Padma Shri, India’s fourth-highest civilian honour, in recognition of his sporting achievements.

The race for which Singh is best remembered is his fourth-place finish in the 400 metres final at the 1960 Olympic Games, which he had entered as one of the favourites. He led the race till the 200m mark before easing off, allowing others to pass him. Various records were broken in the race, which required a photo-finish and saw American Otis Davis being declared the winner by one-hundredth of a second over German Carl Kaufmann. Singh’s fourth-place time of 45.73 became the Indian national record and held for almost 40 years