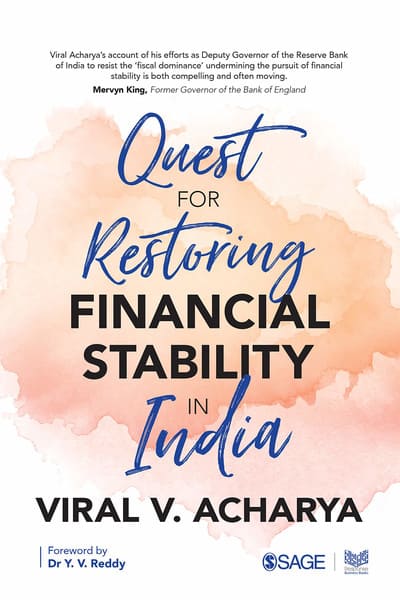 This books describes the problem of financial stability in India as well as a concrete plan to achieve it on a durable basis.

Beyond the headline-grabbing issues, the Indian economy is struggling to solve a critical problem: How to restore and maintain financial stability on a durable basis. In this book titled, Quest for Restoring Financial Stability in India, Former Deputy Governor of RBI, Dr. Viral V. Acharya, talks about his quest for restoring financial stability in India and offers a concrete plan for sustained improvement. Dr Acharya shares a feasible plan to address the recapitalization needs of public sector banks, offering solutions on how to improve credit allocation by credit intermediaries and establish viable and efficient capital markets. Elucidating the need-of-the-hour reforms, this book also raises several stark and unanswered questions related to the re-emergence of fiscal dominance in India, not just of monetary policy tools but also of banking regulations. It makes a persuasive case for striking the right balance between the government, banks, private sector and markets, in order to improve long-term growth prospects for the economy.

The author is the C. V. Starr Professor of Economics in the Department of Finance at New York University Stern School of Business (NYU Stern). He was the Deputy Governor of the Reserve Bank of India (RBI) from 23 January 2017 to 23 July 2019, in charge of monetary policy, financial markets, financial stability and research.

He has been the Director of the National Stock Exchange of India and the NYU Stern Initiative on the Study of Indian Capital Markets, and a member of the Economic Advisory Committee of the Financial Industry Regulation Authority (FINRA), International Advisory Board of the Securities Exchange Board of India, Advisory Council of the Bombay Stock Exchange Training Institute and Academic Research Council Member of the Center for Advanced Financial Research and Learning (CAFRAL, India). In addition, he has served as an academic advisor to the Federal Reserve Banks of Chicago, Cleveland, New York and Philadelphia; the Federal Reserve Board of Governors and the Advisory Scientific Council of the European Systemic Risk Board.

Dr Acharya’s primary research interest is in theoretical and empirical analysis of systemic risk of the financial sector—its regulation and its genesis in government-induced distortions. He is a research associate of the National Bureau of Economic Research (NBER) in corporate finance, a research affiliate at the Center for Economic Policy Research (CEPR) and Research Associate of the European Corporate Governance Institute (ECGI).

He is the recipient of several awards, including the inaugural Banque de France–Toulouse School of Economics Junior Prize in Monetary Economics and Finance in 2011 and the 2017 Alexandre Lamfalussy Senior Research Fellowship of the Bank for International Settlements.

He completed his Bachelor of Technology in Computer Science and Engineering from the Indian Institute of Technology Bombay, Mumbai, in 1995 and his PhD in Finance from NYU Stern in 2001. Prior to joining NYU Stern, he was at London Business School (2001–2008), the Academic Director of the Coller Institute of Private Equity at LBS (2007–2009) and a Houblon-Norman Senior Research Fellow at the Bank of England (Summer 2008).

>At NYU Stern, he co-edited the books Restoring Financial Stability: How to Repair a Failed System (March 2009), Regulating Wall Street: The Dodd-Frank Act and the New Architecture of Global Finance (November 2010) and Dodd-Frank: One Year On (released on voxeu.org, July 2011). He is also the co-author of the book Guaranteed to Fail: Fannie Mae, Freddie Mac, and the Debacle of Mortgage Finance (March 2011).