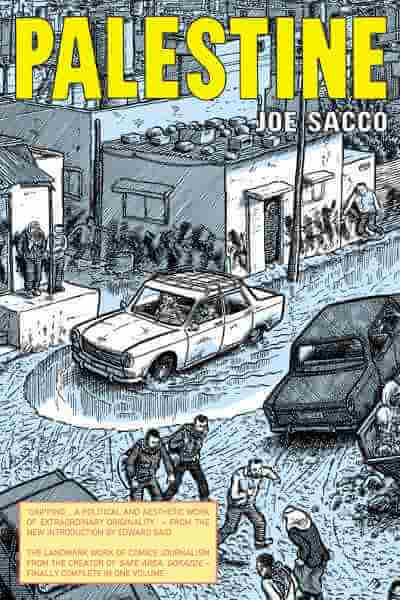 Palestine is a non-fiction graphic novel written and drawn by Joe Sacco about his experiences in the West Bank and the Gaza Strip in December 1991 and January 1992.

Originally published in 1993 as a nine-issue comic series, Palestine is an illustrated account of the cartoonist Joe Sacco’s visit to the Occupied Territories during 1991 and 1992. Focusing on how private lives are impacted by public policies, Sacco depicts a retaliatory loop of routine horror, while navigating the region’s infernal history and political sensitivities. Now republished in a single volume, Palestine remains, in light of recent events, as pertinent as ever.

Drawing on first-hand experiences, extensive research and more than 100 interviews with Palestinians and Jews, Sacco gained access to unusually intimate testimony, giving space to details and perspectives normally excluded by mainstream media coverage. The enthusiasm and frequency with which Sacco is hauled into the homes of those he meets – to listen, take notes and drink endless cups of tea – underlines the desperation of the people he encounters; their hopes are pinned not on political promises but on telling their stories to a stranger who writes comic books.

Although Palestine is both visually engaging and a labour of artistic love, at its heart lies a commitment to hard-edged journalism and a challenge to the objectivity of the Western (and particularly American) media.

Joe Sacco is a Maltese-American cartoonist and journalist. He is best known for his comics journalism, in particular in the books Palestine (1996) and Footnotes in Gaza (2009), on Israeli–Palestinian relations; and Safe Area Goražde (2000) and The Fixer (2003) on the Bosnian War.

This book will be shipped in 2-4 business days. The time taken for you to receive it will depend upon the mode you choose, while completing your purchase. The rates applicable for each mode are different.