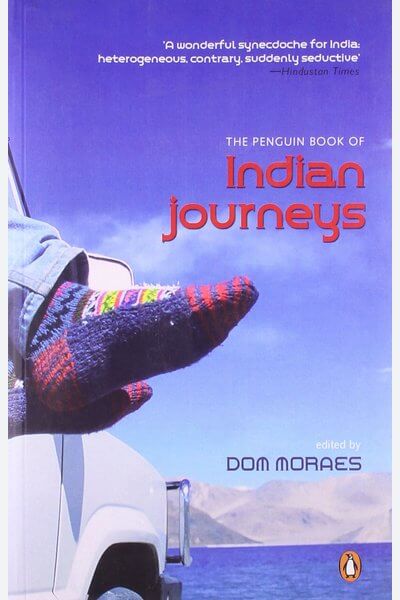 The Penguin Book of Indian Journeys

The Penguin Book of Indian Journeys gives a wide angled view of India, a nation of inexplicable diversity.

A country the size of a continent, home to a sixth of humanity. An ancient civilization that is also a modern democratic republic only half a century old. A nation that is several countries in one. As in ages past, India continues to fascinate travellers who are, in the words of Dom Moraes, the editor of this anthology, ‘startled, annoyed, and attracted by its colossal, inexplicable diversities’. More has been written about it than any other Asian country.

The Penguin Book of Indian Journeys brings together pieces by some of the best contemporary writers in the English language. Travel writers-Indian and foreign, as well as compulsive wanderers without a home engage with the comforts and the chaos, the convictions and the contradictions of modern, independent India. R.K. Narayan does a leisurely tour of Karnataka, taking the ’emerald route’ up and down the Ghats; V.S. Naipaul rages through hot, crowded and apathetic New Delhi; and Vikram Seth flies back, after months of hitch-hiking in strange lands, to familiars, respite and Delhi customs. Ruskin Bond explores the laid-back Agra of the 1960s in the shadow of the unchanging Taj; and midnight’s child Salman Rushdie returns to the land of his birth to try and answer a riddle: Does India exist? At the Kumbh Mela, the world’s biggest religious festival, Mark Tully meets a 300- year-old sadhu. In the forests of the Western Ghats, Abraham Verghese hopes to run into the brigand Veerappan. Jan Morris rides the toy train to ‘the most celebrated of Indian hill stations’ that is ‘all smallness’. And Bruce Chatwin hits the road with the entourage of the post-Emergency, out-of-power Indira Gandhi to see ‘Madam in action’.

The editor was born in Bombay in 1938. At nineteen, he had published his first book of Poems, A Beginning, which won the Hawthornden Prize, at that time the most coveted literary award in England. His second book of verse, Poems (1960), became the Autumn Choice of the Poetry Book Society. Apart from these, he has published eight other collections of poems and over twenty works of prose, including a biography.