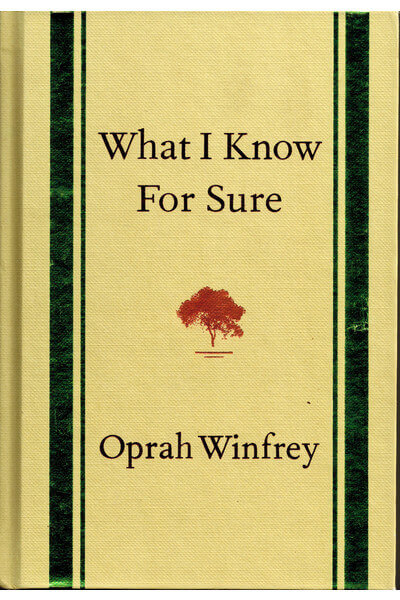 What I Know For Sure

Organised by theme, these essay’s offer a rare, powerful and intimate glimpse into the heart and mind of one of the world’s most extraordinary women.

As a creative force, student of the human heart and soul, and champion of living the life you want, Oprah Winfrey stands alone. Over the years, she has made history with a legendary talk show – the highest-rated program of its kind, launched her own television network, become the nation’s only African-American billionaire, and been awarded both an honorary degree by Harvard University and the Presidential Medal of Freedom. From all her experiences, she has gleaned life lessons—which, for fourteen years, she’s shared in O, The Oprah Magazine’s widely popular “What I Know For Sure” column, a monthly source of inspiration and revelation.

Now, for the first time, these thoughtful gems have been revised, updated, and collected in a book.

The author (born January 29, 1954) is an American media executive, actress, talk show host, television producer, and philanthropist. She is best known for her talk show, The Oprah Winfrey Show, broadcast from Chicago, which was the highest-rated television program of its kind in history and ran in national syndication for 25 years from 1986 to 2011.