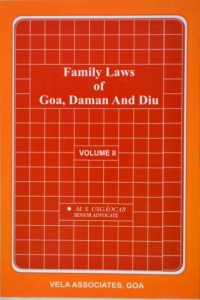 Family Laws of Goa, Daman And Diu: Volume 1
By the Goa, Daman and Diu Administration Act, the Parliament of India maintained that all Portuguese laws would remain in force in Goa, Daman and Diu before its liberation until amended or repealed by the competent legislature or other competent authority. Among these laws, the family laws relating to marriage, divorce and children, are still in force.

The text thereof is in Portuguese which created difficulty in the administration of justice for the members of the Bench and Bar not conversant with the Portuguese language and laws. and therefore a translation was required.

The purpose of translation was two-fold: First, to facilitate the administration of justice by those who are not conversant by the Portuguese language and laws, and, second, to make know the set-up of Family Laws in force in this territory (of Goa) to the rest of India.

This volume contains the translation of Articles 1735 to 2166. It also covers provisions related to Inventory Proceedings, Provisions of Donations, Executions of Wills, Special Rules of Succession, Gifts, Notarial Law, and Civil Code regarding rights of citizens and non-citizens.

He was also the advocate General of State of Goa and ex-officio Member of the Bar Council of Maharastra and Goa in 1999.

He has been a editor of Goa Law Times, a monthly journal published by Voikuntrao Dempo Centre for Indo-Portuguese Studies, at Goa

Shipping costs depend on the mode chosen, the weight of the item, and the distance it will travel to reach its destination. There is also a Goods and Services Tax (GST) levied on shipping within India. Shipping costs will be charged depending on the weight of the entire purchase (if more than one item is purchased). The same shipping mode will apply to all products in such a case.

Welcome to The Dogears Bookshop. We are experiencing some delays in shipping out books due to covid-related interruptions beyond our control. Similarly, shipments by some modes, to certain countries and states within India, are taking longer than usual to reach. We will keep you updated at regular intervals on the status of each shipment. Further, you can reach us at [email protected] Dismiss
Join Waitlist We will inform you when the product arrives in stock. Please leave your valid email address below.
WooCommerce Enquiry Plugin by WisdmLabs