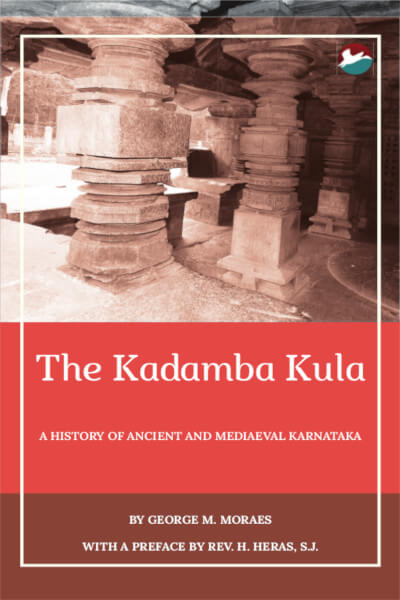 The Kadamba Kula: A History of Ancient and Medieval Karnataka

Kadamba Kula by George M Moraes is the only comprehensive work of a pre-Mughal Hindu dynasty in existence. It contains information about the rulers and their lineages and conquests, administration, art, literature, social life, and trade and industry among the Kadambas.

The Kadambas were undoubtedly a southern family who were accepted into the Brahminical fold, but whose name records the tree which they worshipped. Only in the eleventh century did they invent a northern ancestry, and, less vain-glorious than their contemporaries, the Hoysalas, who claimed descent from the Yadavas, even then made no effort to assert connections wih lunar or solar lines. Apparently it was Samudragupta’s great expedition to the South in about 340-50 AD which gave Mayuravarman the chance of establishing himself in independence in Banavasi, where the dynasty endured until defeated by Pulikeci in 607. In the tenth century there was a revival, and new Kadamba dynasties appeared at Hangal and Goa; both fell in the fourteenth century. In his book, the author, George Moraes, has pieced together the history of the Kadambas from scanty records, epigraphic and numismatic.

At the time of its publication, the Kadamba Kula was the only comprehensive work of a pre-Mughal Hindu dynasty in existence. In his book, Mr. Moraes has carefully studied every available original authority, and his knowledge of inscriptions and copper-plates is found to be accurate and up-to-date. In addition, the book contains a series of plates illustrating the fine temples and other monuments of the period, as well reproductions of the coins and seals of the dynasty. In addition to information about the rulers and their lineages and conquests, the book contains sections devoted to Administration, Art, Literature, Social Life, and Trade and Industry among the Kadambas.

George Moraes was born in 1905 and died in the year 1994. He was a great historian and Professor of History at St. Xavier’s College, Mumbai.

This book is printed on demand, and hence will be shipped in 8-10 working days. The time taken for you to receive the book after it is shipped will depend upon the mode you choose, while completing your purchase. The rates applicable for each mode are different.