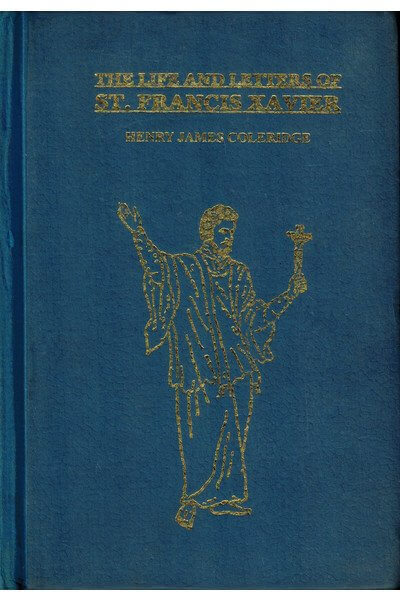 The Life and Letters of St. Francis Xavier (Set of 2)

The life and letters of St. Francis Xavier.

The life and letters of St. Francis Xavier.

A writer and preacher, b. 20 September 1822, in Devonshire, England ; d. at Roehampton, 13 April 1893. He was the son of Sir John Taylor Coleridge, a Judge of the King’s Bench, and brother of John Duke, Lord Coleridge, Chief Justice of England. His grandfather, Captain James Coleridge, was brother to Samuel Taylor Coleridge, the poet and philosopher. He was sent to Eton at the age of thirteen and thence to Oxford, having obtained a scholarship at Trinity College. His university career was distinguished; in 1844 he took the highest honours in a fellowship at Oriel, then the blue ribbon of the university. In 1848 he received Anglican orders. The Tractarian movement being then at its height, Coleridge, with many of his tutors and friends, joined its ranks and was an ardent disciple of Newman till his conversion. He was one of those who started “The Guardian” newspaper as the organ of the High Church partly being for a time its Oxford sub-editor. Gradually various incidents, the secession of Newman, Dr. Hampden’s appointment as Regius Professor of Theology, the condemnation and suspension of Dr. Pusey, the condemnation and deprivation of W.G. Ward, and the decision in the celebrated Gorham case, seriously shook his confidence in the Church of England. In consequence Dr. Hawkins, Provost of Oriel, declined to admit him as a college tutor, and he therefore accepted a curacy at Alphinton, a parish recently separated from that of Ottery St. Mary, the home of his family, where his father had built for him a house and school. Here, with most congenial work, he was in close connection with those to whom he was already bound by a singular affection. His doubts as to his religious position continued, however, to grow and early in 1852 he determined that he could no longer remain in the Anglican Communion .

On Quinquagesima Sunday (February 22) he bade farewell to Alphington, and in April, after a retreat at Clapham under the Redemptorist Fathers he was received into the Catholic Church. Determined to be a priest he proceeded in the following September to Rome and entered Accademia dei Nobili, where he had for companions several of his Oxford friends, and others, including the future Cardinals Manning and Vaughan. He was ordained in 1856 and six months later took the degree of D.D. In the summer of 1857 he returned to England, and on the 7th of September entered the Jesuit Novitiate, which was then at Beaumont Lodge, Old Windsor, his novice master being Father Thomas Tracy Clarke, for whom to the end of his life he entertained the highest admiration and esteem. In 1859 he was sent to the Theological College of St. Bruno’s, North Wales, as a professor of Scripture, and remained there until, in 1865, he was called to London to become the first Jesuit editor of “The Month”, a magazine started under other management in the previous year. Then cornmenced a course of indefatigable literary labour by as which he is best known. Besides the editorship of “The Month”, to which, after the death of Father William Maher, in 1877, he added that of “The Messenger”, and for which he was one of the most prolific writers, Father Coleridge projected and carried on the well known Quarterly Series to which he himself largely contributed, both with his great work “The Public Life of Our Lord” and others, such as “The Life and Letters of St. Francis Xavier ” and “The Life and Letters of St. Teresa”. Worthy of mention also is his Harmony of the Gospels, “Vita Vitae Nostrae”, a favourite book for meditation, published also in an English version. Studies based on the New Testament were his work of predilection, a taste which seems to have been acquired, at least in part from his old Oxford tutor, Isaac Williams. For a time he was also superior of his religious brethren in Farm Street, London. In 1881 failing health obliged him to resign “The Month” to another Oxonian, Father Richard F. Clarke, but he continued to labour on “The Life of Our Lord” which he earnestly desired to finish. In 1890 a paralytic seizure compelled him to withdraw to the novitiate at Roehampton, where, with indomitable spirit, he succeeded in completing his magnum opus before passing away. The chief sources for his life are articles in The Month, June, 1893, by his friend James Patterson, Bishop of Emmaus, and Father Richard F. Clarke, S.J.