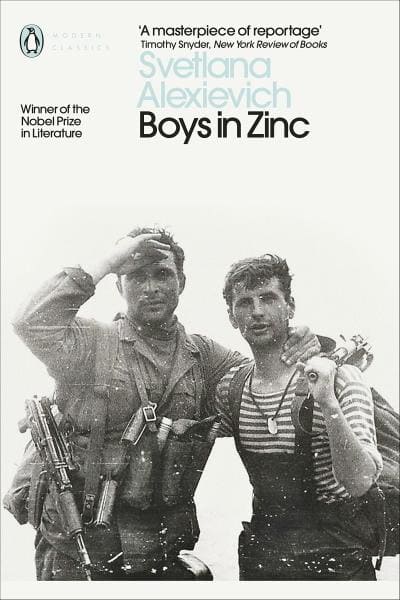 Boys in Zinc gives us unflinching, harrowing insight into the the soviet war inn Afghanistan from 1979 to 1989.

From 1979 to 1989 Soviet troops engaged in a devastating war in Afghanistan that claimed thousands of casualties on both sides. While the Soviet Union talked about a ‘peace-keeping’ mission, the dead were shipped back in sealed zinc coffins. Boys in Zinc presents the honest testimonies of soldiers, doctors and nurses, mothers, wives and siblings who describe the lasting effects of war.

Weaving together their stories, Svetlana Alexievich shows us the truth of the Soviet-Afghan conflict: the killing and the beauty of small everyday moments, the shame of returned veterans, the worries of all those left behind. When it was first published in the USSR in 1991, Boys in Zinc sparked huge controversy for its unflinching, harrowing insight into the realities of war.

The author was born in Ivano-Frankivsk in 1948 and has spent most of her life in the Soviet Union and present-day Belarus, with prolonged periods of exile in Western Europe. Starting out as a journalist, she developed her own, distinctive non-fiction genre which brings together a chorus of voices to describe a specific historical moment. Her works include The Unwomanly Face of War (1985), Last Witnesses (1985), Boys in Zinc (1991), Chernobyl Prayer (1997) and Second-Hand Time (2013). She has won many international awards, including the 2015 Nobel Prize in Literature for ‘her polyphonic writings, a monument to suffering and courage in our time’.