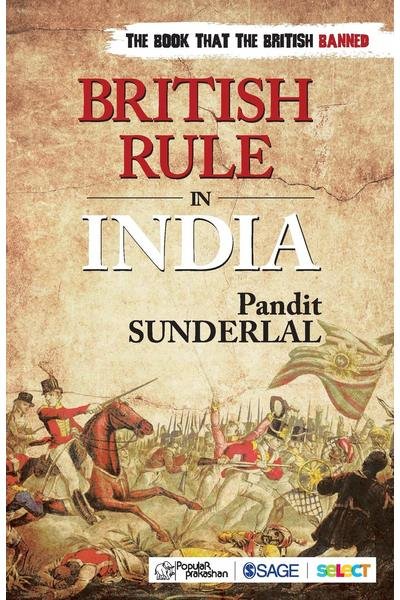 This second book of a two-part series covers the period from 1805 (Second Maratha War) to 1858, when the East India Company ceded control to the British Crown.

A freedom fighter’s account of India’s struggle for independence.

In 1929, Pandit Sunderlal’s original work in four volumes, Bharat Mein Angrezi Raj, was banned by the British because of its fearless criticism of their rule in India. In sharp contrast to narratives by British historians, who stressed that India was in a state of arrested development before the British arrived, Pandit Sunderlal’s books celebrated India’s past. In 1960, the Government of India brought out this history in two volumes: How India Lost Her Freedom and British Rule in India. The first volume How India Lost Her Freedom was published by SAGE earlier this year. It details how British traders penetrated the sub-continent and established the foundation of their rule.

This second volume British Rule in India covers the period from 1805 (Second Maratha War), a turning point for the East India Company, to 1858, when the East India Company had to cede control to the British Crown. It details how the British acquired territories by sly and dishonourable treaties and how their rule led to extremely large-scale economic exploitation. It painstakingly traces the history of the deliberate destruction of Indian industry and the plundering that went on under the guise of development.

Pandit Sunderlal was an eminent Gandhian and freedom fighter. He was originally a revolutionary and belonged to the famous Ghadar party. After coming in close contact with Mahatma Gandhi in the early 1920s, Pandit Sunderlal became a Gandhian and a practitioner of non-violence and Ahimsa. He represented the holistic evolution of a revolutionary to a Gandhian believing in non-violence and worked closely with Mahatma Gandhi in Sevagram Ashram, Wardha. He was imprisoned seven times for participating in the Indian freedom movement.