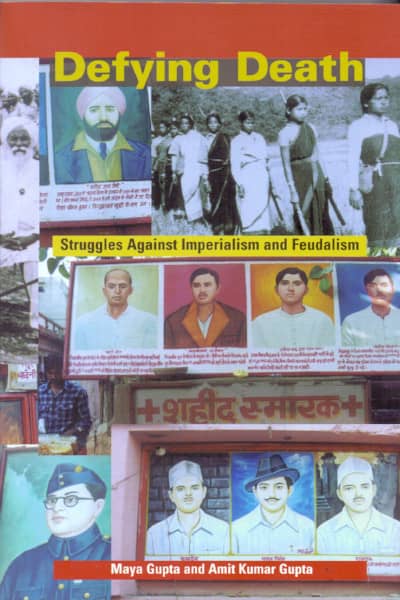 Defying Death : Struggles Against Imperialism and Feudalism includes essays, that have been written over several years, and which document various episodes of resistance and highlight the role of freedom fighters during India’s struggle for freedom.

Armed resistance to British imperialism, the study of which is often neglected and underplayed among students of mainstream history, is a significant part of India’s epic struggle for freedom. This volume includes essays, that have been written over several years, and which document various episodes of resistance and highlight the role of freedom fighters who inspired generations of Indians by their sacrifices. Among other incidents, the book discusses the Vellore Mutiny, the Chittagong Uprising, the Non-Cooperation Movement and the militants of Bengal, Gandhi’s attitude to the execution of Bhagat Singh, the Telengana and Kakdwip rising. The essays in the book also emphasize the fact that the fight against colonial oppression and exploitation was inextricably linked to the struggle against feudalism.

Amit Kumar Gupta has been researching and writing on issues of modern Indian history for several years now. His publications include North-West Frontier Province Legislature and the Freedom Struggle 1932–47 (1976), Between a Tory and a Liberal: Bombay under Sir James Fergusson 1880–85 (1978), and The Agrarian Drama: The Leftists and the Rural Poor in India 1934–51(1996).

Maya Gupta is the author of Lord William Bentinck in Madras and the Vellore Mutiny 1803–07 (1987), and has contributed numerous essays to journals and collection of articles.

This book will be shipped in 4-8 days’ time. The time taken for you to receive the book after it is shipped will depend upon the mode you choose, while completing your purchase. The rates applicable for each mode are different.