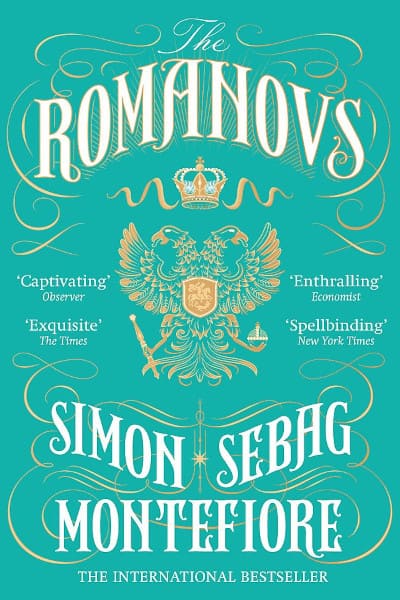 The Romanovs: 1613-1918 by Simon Sebag Montefiore is an enthralling story who transformed Russia from a war-ruined principality into the world’s greatest empire.

The Romanovs were the most successful dynasty of modern times, ruling a sixth of the world’s surface. How did one family turn a war-ruined principality into the world’s greatest empire? And how did they lose it all? This is the intimate story of twenty tsars and tsarinas, some touched by genius, some by madness, but all inspired by holy autocracy and imperial ambition. Montefiore’s gripping chronicle reveals their secret world of unlimited power and ruthless empire-building, overshadowed by palace conspiracy, family rivalries, sexual decadence and wild extravagance and peopled by a cast of adventurers, courtesans, revolutionaries and poets. Written with dazzling literary flair, drawing on new archival research, The Romanovs is at once an enthralling chronicle of triumph and tragedy, love and death, a universal study of power and an essential portrait of the empire that still defines Russia today.

Simon Sebag Montefiore is the internationally bestselling author of a number of prize-winning books that have been published in forty-eight languages. Catherine the Great & Potemkin was shortlisted for the Samuel Johnson Prize; Stalin: The Court Of The Red Tsar won the BBA History Book of the Year Prize; Young Stalin won the Costa Biography Award, the LA Times Book Prize for Biography and the Grand Prix de la Biographie Politique; Jerusalem: The Biography won the JBC Book of the Year Prize and the Wenjin Book Prize in China; The Romanovs: 1613-1918 won the Lupicaia del Terriccio Book Prize. He is the author of the Moscow Trilogy of novels: Sashenka, Red Sky at Noon and One Night in Winter, which won the Political Fiction Book of the Year Award. He is also the author of Written in History: Letters That Changed the World and Voices Of History: Speeches That Changed the World.