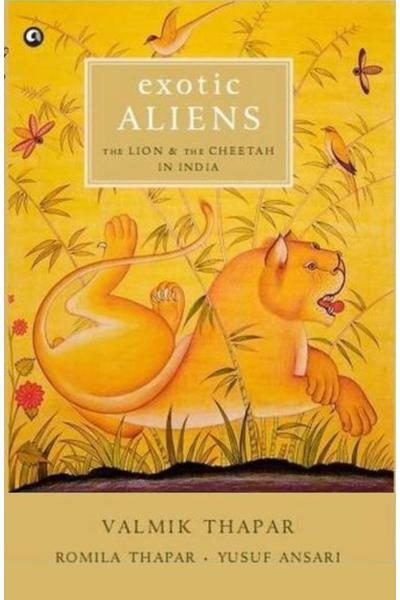 Exotic Aliens: The Lion and the Cheetah in India

Tracing the history of the lion and the cheetah for over 5000 years, and substantiated with pictorial evidence, Exotic Aliens is a pioneering work that could turn field biology on its head.

In the sixteenth century, Dutch traveller Jan Linschoten noted the absence of lions throughout the Indian subcontinent. Two hundred years later, echoing similar comments made by various hunters and observers of Indian wildlife, the British shikari and writer, Captain Thomas Williamson, emphatically declared: ‘There are no lions in Hindustan.’ Much the same was said about the cheetah in the region. These observations piqued the interest of well-known naturalist Valmik Thapar. After an enormous amount of research and study he now believes that, contrary to existing scientific theory, neither of these animals were indigenous to the Indian subcontinent.

Remarking on the lack of accounts of encounters with these animals—as opposed to the tiger and the leopard, of which there are hundreds—as well as inconclusive genetic studies, he argues that, over the centuries, the lion and cheetah were brought into the country from Persia and Africa by royalty, either as tributes or to populate their hunting parks and menageries.

Enlisting the help of renowned historians, Romila Thapar—who analyzes historical accounts and representations of the lion in early India—and Yusuf Ansari—who looks back at the lives of the Mughals and their famed hunts—to further validate his theory, Valmik Thapar, concludes at the end of this thought-provoking book that the Indian lion and the Indian cheetah were, in fact, exotic imports, and not indigenous subspecies.

Tracing the history of the lion and the cheetah for over 5000 years, and substantiated with pictorial evidence, Exotic Aliens is a pioneering work that could turn field biology on its head.

Valmik Thapar has spent four decades serving the cause of wild India. During this time, he has authored, co-authored and edited more than twenty-five books and made or presented nearly a dozen films for the BBC and several other television networks on the tiger and Indian flora and fauna. His latest book Saving Wild India: A Blueprint for Change is all about finding real solutions to protect India’s wildlife. Other recent books include Winged Fire, the concluding book in the trilogy that features Wild Fire and Tiger Fire.

Thapar has created a major non-governmental organization dedicated to conserving wildlife, the Ranthambore Foundation. He is currently a member of the Rajasthan Board for Wildlife chaired by the state’s chief minister and has helped the state government formulate a holistic forest conservation scheme—the Van Dhan Yojana.