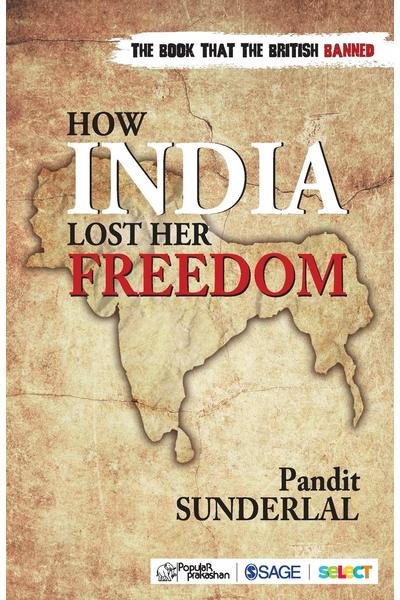 How India Lost Her Freedom

This book, that was banned by the British, recounts how India lost its freedom.

A freedom fighter’s account of India’s struggle for independence.

How the British came to India, slowly penetrated the sub-continent and established an empire is a story recorded by many historians but not fully told…

The early British historians tried to play down the role of their countrymen in subjugating the native kingdoms in India by all means. It was left to a few diligent historians to carry out painstaking research and unravel the facts. Pandit Sunderlal, who wrote this sensational book originally in Hindi in 1929, vigorously exposed the British plan to enlarge their sphere of influence in India slowly and steadily through a number of dubious methods. Apart from revealing the state of affairs between the Indian native kingdoms and the East India Company, How India Lost Her Freedom provides a fine account of what India was prior to the advent of the British. The book focuses on the crucial facts and events that led to the establishment of British rule over India.

Pandit Sunderlal was an eminent Gandhian and freedom fighter. He was originally a revolutionary and belonged to the famous Ghadar party. After coming in close contact with Mahatma Gandhi in the early 1920s, Pandit Sunderlal became a Gandhian and a practitioner of non-violence and Ahimsa. He represented the holistic evolution of a revolutionary to a Gandhian believing in non-violence and worked closely with Mahatma Gandhi in Sevagram Ashram, Wardha. He was imprisoned seven times for participating in the Indian freedom movement.