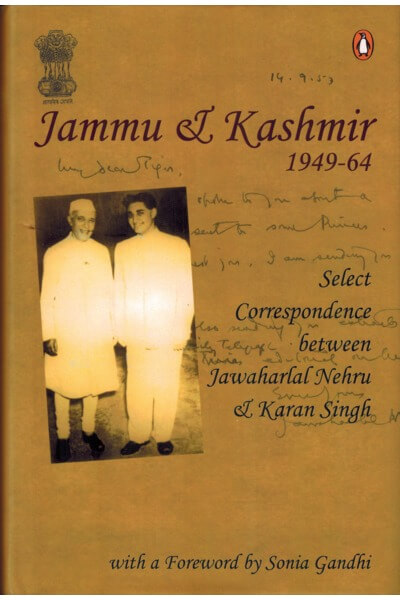 A rare collection, this book offers an unmatched ringside view of the momentous events in Kashmir and the rest of India after Independence.

In 1949, Dr Karan Singh had just turned eighteen when he was appointed regent of Jammu and Kashmir, two years after his father, Maharaja Hari Singh, signed the Instrument of Accession merging the then independent state with India. Under the mentorship of Pandit Jawaharlal Nehru, Dr Singh was at the helm of affairs in the state for eighteen years, successively as regent, Sadar-i-Riyasat and governor.

This carefully conceived selection of over 200 letters exchanged between Dr Singh and Pandit Nehru sheds light on significant issues and events, including the teething problems of a fledgling country and a newly grafted state, the emerging conflicts between Pakistan and India, and the Chinese aggression of 1962. In addition to valuable insights into the political situation of the period, these letters also provide rare glimpses into the personal lives and thoughts of Pandit Nehru and Dr Singh. The memorandum submitted by Maharaja Hari Singh to President Rajendra Prasad in August 1952 is published in full, revealing how the identity and future of Kashmir were shaped.

Dr Karan Singh was born heir apparent to the state of Jammu and Kashmir and served successively as regent, Sadar-i-Riyasat and governor. A Padma Vibhushan, Dr Singh has held the portfolios for tourism and civil aviation, health and family planning, and education and culture in the Indian government, and served as ambassador to the United States. He has been chairman of the Committee on Ethics of the Rajya Sabha. As chancellor, he has been associated with the Jammu and Kashmir University, the Jawaharlal Nehru University and the Banaras Hindu University. He has chaired the Indian Board of Wildlife and the India International Centre. Presently, Dr Singh is chairman of the governing board of the Auroville Foundation and was India’s representative on the UNESCO executive board for many years. Associated with several cultural and academic institutions, he composes and recites devotional songs in Dogri and is a connoisseur of Indian classical music.

Dr Singh’s published works include his Autobiography, Essays on Hinduism, An Examined Life, A Treasury of Indian Wisdom, as well as his extensive correspondence with Pandit Jawaharlal Nehru in Jammu and Kashmir 1949-64.

Dr Jawaid Alam teaches modern and contemporary Indian history at Jamia Millia Islamia, New Delhi. He was associated with the department of culture, Government of India, for ten years to edit the collected works of G.B. Pant and the selected works of Jawaharlal Nehru at the Teen Murti House. He worked as principal researcher and coordinator for collecting and scrutinizing relevant materials to create the high-profile museum at the Statue of Unity, Gujarat. He is the author of Government and Politics in Colonial Bihar 1921-1937 .