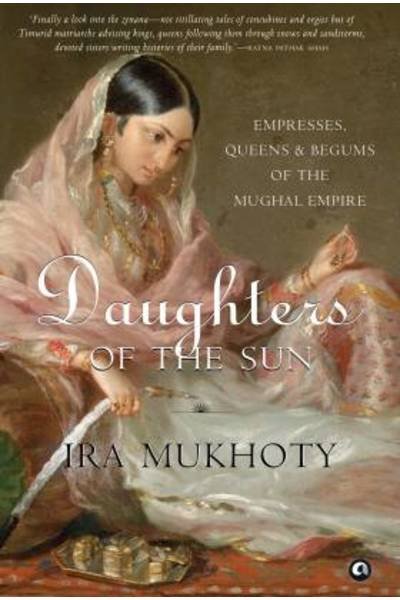 Daughters of the Sun: Empresses, Queens and Begums of the Mughal Empire

The very first attempt to chronicle the women who played a vital role in building the Mughal empire, daughters of the sun is an illuminating and gripping history of a little known aspect of the most magnificent dynasty the world has ever known.

In 1526, when the nomadic Timurid warrior-scholar Babur rode into Hindustan, his wives, sisters, daughters, aunts and distant female relatives travelled with him. These women would help establish a dynasty and empire that would rule India for the next 200 years and become a byword for opulence and grandeur. By the second half of the seventeenth century, the Mughal empire was one of the largest and richest in the world.

The Mughal women unmarried daughters, eccentric sisters, fiery milk mothers and powerful wives often worked behind the scenes and from within the Zenana, but there were some notable exceptions among them who rode into battle with their men, built stunning monuments, engaged in diplomacy, traded with foreigners and minted coins in their own names. Others wrote biographies and patronised the arts.

In daughters of the sun, we meet remarkable characters like Khanzada begum who, at sixty-five, rode on horseback through 750 kilometres of icy passes and unforgiving terrain to parley on behalf of her nephew, Humayun, Gulbadan begum, who gave us the only document written by a woman of the Mughal royal court, a rare glimpse into the harem, as well as a chronicle of the trials and tribulations of three emperors Babur, Humayun and Akbar her father, brother and nephew, Akbar’s milk mothers or foster-mothers, Jiji Anaga and Maham Anaga, who shielded and guided the thirteen-year-old emperor until he came of age, Noor Jahan, ‘light of the world’, a widow and mother who would become Jahangir’s last and favourite wife, acquiring an imperial legacy of her own and the fabulously wealthy begum sahib (princess of princesses) Jahanara, shah Jahan’s favourite child, owner of the most lucrative port in medieval India and patron of one of its finest cities. The very first attempt to chronicle the women who played a vital role in building the Mughal empire, daughters of the sun is an illuminating and gripping history of a little known aspect of the most magnificent dynasty the world has ever known.

Ira Mukhoty is an Indian author. She studied natural sciences at the University of Cambridge. Her book Heroines: Powerful Indian Women of Myth and History, tells the tales of mythical heroines including Draupadi and Radha, and “six real women who played extraordinary roles but who weren’t written into textbooks as were their male counterparts”, including Jahanara Begum, Rani Laxmibai and Hazrat Mahal.

Her second book Daughters of the Sun: Empresses, Queens and Begums of the Mughal Empire which was about the disappeared Women of the great Mughals.