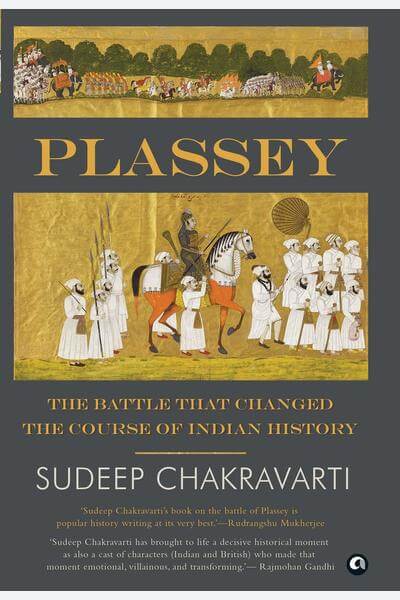 Plassey: The Battle that Changed the Course of Indian History

The Battle of Plassey was, fought on 23 June 1757, was a turning point in Indian history. This book gives account of this battle.

The Battle of Plassey, fought on 23 June 1757, changed the course of Indian history forever. When the short, sharp hostilities between the forces of the nawab of Bengal, Siraj-ud-daulah, and East India Company troops led by Robert Clive, an ambitious soldier of fortune, ended, Britain was on its way to becoming the dominant force in the region. The eighteenth century was a time of great political churn in the subcontinent. After the death of Emperor Aurangzeb, the Mughal empire began to slowly fracture. In the east, the nawabs of Bengal, who ruled in the name of the Mughals, took the opportunity to break free. By the middle of the century, Siraj-ud-daulah succeeded his grandfather, Alivardi Khan, to the throne of Bengal. The young nawab clashed frequently with the Company as it looked to aggressively expand and safeguard its interests. Their skirmishes led inexorably to Plassey, a decisive battle in a mango orchard by the banks of the Bhagirathi-Hugli. But what was Plassey all about, besides a young nawab who stood in the way of a company’s business plans and a country’s dreams of conquest? Was it really a battle or was it won before it began? What were the politics of the time that permitted Plassey? Why did the British so desperately want Bengal? Who were the faces beyond a callow Siraj and a crafty Clive, the two main combatants? What are the stories behind the spurned general, the ambitious and hateful aunt, the rude and covetous cousin, the insulted banker, the grasping merchant? And how was Plassey seen? By the victors and the vanquished? The colonizer and the colonized? Why does Plassey remain such a fascinating story even today? Using multilingual sources and a multidisciplinary approach, Sudeep Chakravarti answers all these questions and a myriad others with great insight and nuance. Impeccably researched and brilliantly told, Plassey is the best account yet of one of the turning points in Indian history.

The author is acclaimed for several bestselling works of non-fiction including The Bengalis: A Portrait of Community (shortlisted for The Hindu Prize 2018 and Tata Literature Live! Award 2018). His other notable non-fiction works are Red Sun, Highway 39 and Clear Hold Build. He has written three critically acclaimed novels (Tin Fish, The Avenue of Kings and The Baptism of Tony Calangute) and short stories.

He read history at St Stephen’s College, University of Delhi. He is co-founder of Coastal Impact, an organization of divers and scientists, which conducts research for institutions and evangelizes marine conservation to school and university students. He lives in Goa.