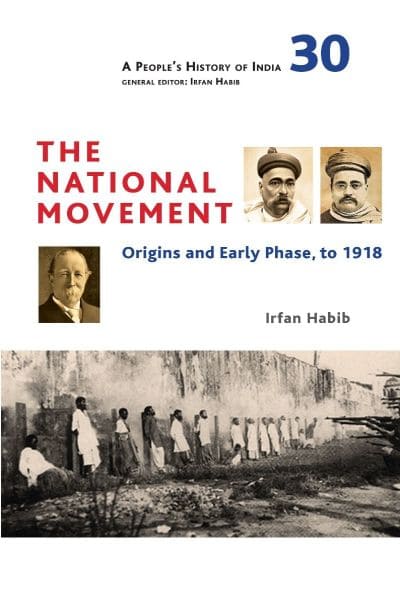 The National Movement: Origins and Early Phase, to 1918

This book looks at how resistance to British rule developed and the awakening and growth of national consciousness leading to the National Movement.

The volume you hold in your hand deals with the ways in which resistance to British rule developed, closing with the Revolt of 1857. It then passes on to the factors that led to the rise of national consciousness in India. This is followed by an account of the development of the National Movement from 1885, when the Congress was founded, till 1918, on the eve of Gandhi’s emergence as its undisputed leader. While giving a narrative of events, dissensions and shifting British policies, the volume seeks to understand how the National Movement, beginning as a middle-class initiative, went on to acquire a mass character with early stirrings of workers’ and peasants’ struggles.

The book has notes on themes like the concept of nation and the middle class, as well as the historiography of the national movement and the shaping of Gandhi’s early ideas. It has extensive extracts from important documents that would not otherwise be readily available to readers.

The author is Professor Emeritus at the Aligarh Muslim University. He has written The Agrarian System of Mughal India, 1556-1707 (1963; revised edition 1999), An Atlas of the Mughal Empire (1982), Essays in Indian History: Towards a Marxist Perception (1995), Medieval India: The Study of a Civilization (2007), Economic History of Medieval India, 1200-1500 (with collaborators) (2011) and Atlas of Ancient Indian History (with Faiz Habib) (2012). He has co-edited The Cambridge Economic History of India, Vol. I (1982), UNESCO’S History of Humanity, Vols. 4 and 5, and UNESCO’S History of Central Asia, Vol. 5. He is the General Editor of the People’s History of India, and has authored several volumes in the series.