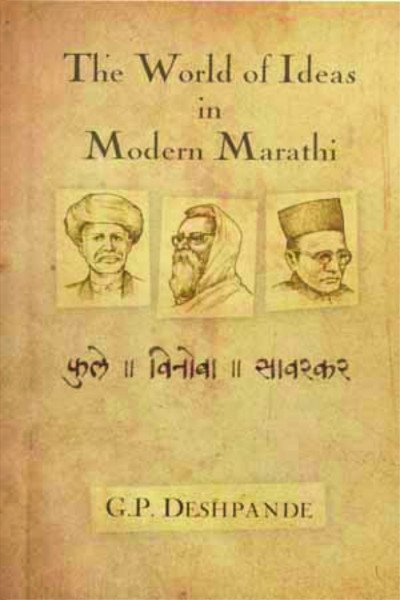 The World of Ideas in Modern Marathi

G.P. Deshpande’s new book shows us the riches we can hope to unearth if only we start listening to the vernacular. He discusses the ideas of three influential and vastly different thinkers in Marathi.

The historiography of nineteenth-century India is beset by a problem which flows from an assumption that India is one history area. It is within the grand narrative of Indian history that debates in different regions and in various language discourses are viewed and interpreted. This leaves a large gap in our understanding of particular histories, especially the history of ideas. In Marathi writing, for instance, the figure of Savarkar evokes responses from critics as much as from admirers that are very different from those in English.

G.P. Deshpande’s new book shows us the riches we can hope to unearth if only we start listening to the vernacular. He discusses the ideas of three influential and vastly different thinkers in Marathi. The radical ideologue of shudratishudra emancipation, Jotirao Phule the Hindutva ideologue V.D. Savarkar and the ideologue of Vedanta supremacy, Vinoba Bhave. This unusual grouping itself helps us break out of conventional ways of looking at intellectual history, but the author goes further. By analyzing the writings of these thinkers in conjunction with writings on them in Marathi, he underlines that the reception of their ideas in that language is as important as the ideas themselves. He thus points to a method of reading that will be useful to those interested in the history of ideas in any Indian language.

In making a series of rigorous arguments in an entertaining and polemical style, this book is an original and feisty addition to the histo­riography of modern India.

G.P. Deshpande (1938-2013) retired as Professor of Chinese Studies at the School of International Studies, Jawaharlal Nehru University, New Delhi. He is the author of The World of Ideas in Modern Marathi: Phule, Vinoba, Savarkar (Tulika, 2009), Talking the Political Culturally and Other Essays (Thema 2009) and Dialectics of Defeat: The Problems of Culture in Postcolonial India (Seagull 2006). He is also a playwright and critic in Marathi. His best-known plays include Uddhwasta Dharmashala (A Man in Dark Times), Andhar Yatra (Passage to Darkness), Chanakya Vishnugupta, Raaste (Roads), and Satyashodhak, a play on the life and times of Jotirao Phule.