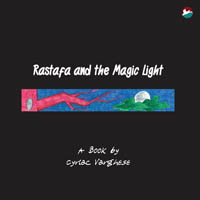 Rastafa And The Magic Light

Cyriac Varghese, originally from Kerala, grew up in Mumbai. Born in 1989, his childhood was typical of the 80’s during which some of the best cartoons were on air..

Cyriac Varghese, originally from Kerala, grew up in Mumbai. Born in 1989, his childhood was typical of the 80’s during which some of the best cartoons were on air. He took his first steps towards making art by sketching out the characters of cartoon shows such as He-Man, TNT, Tom & Jerry and the Flintstones, during the wee hours of the morning. Although he initially began to pursue graphic design, he later changed lanes and began writing and attended a course in creative writing conducted by the British Council in Delhi. Singing and art are two passions that run in his family. Whether vocals or illustrations, they are both molded by his fascination of mysticism. He thoroughly enjoys long jam sessions and now hopes of forming a band. His vocals tend to be loud and experimental but also at times eerie and ambient, which led to his study of the Basuri (Indian classical flute). His art is highly intuitive and always done without any reference, thus allowing a natural flow. He has also been an active basketball player in school and has played for the three schools he has attended, for two clubs and for the district of Mumbai, South East.

‘Rastafa and the Magic Light’ began life as a college assignment. This is the first time that the author has attempted to construct a story, a visual for children. The book was written and illustrated within a week’s time. At the end of it, the look and feel of the visual narrative took on a crude style. It is a style the author has decided to stick with owing to the fact that it complements the fable-like character of the story. The author hopes the reader will enjoy this short adventure which is not without its underlying message.

This book is printed on order, and hence will be shipped in 2 weeks’ time. The time taken for you to receive it after it is shipped will depend upon the mode you choose, while completing your purchase. The rates applicable for each mode are different.