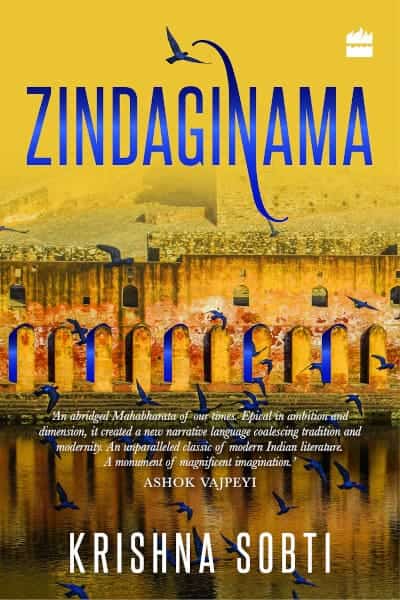 Zindaginama is a giant patchwork of tapestry in rich warm colours and vivid detail, that depicts life and times of a small village in pre-partition Punjab. A Punjab that is on the brink of change.

It is sometime in the first decade of the 20th century. The British Imperialists have been in India for over 150 years. However, life in the small village of Shahpur in undivided Punjab has remained largely unchanged. The menfolk look to the wealthy and worldly-wise Shahji and his benevolent younger brother Kashi for support and advice, while it is Shahji’s wife’s home and hearth that is the centre of all celebrations for the women. Local disputes, trade, politics, a trickling of news from the Lahore newspaper are all discussed every evening at the Shah’s haveli. But as the Ghadar Movement gains momentum elsewhere in Punjab and in Bengal, bringing into focus the excesses of the British, the simple village of Shahpur cannot help looking at itself. The discontent has set in. Krishna Sobti’s magnum opus, Zindaginama brilliantly captures the story of India through a village where people of both faiths coexisted peacefully, living off the land. Detailing the intricately woven personal histories of a wide set of characters, she imbues each with a unique voice, enriching the text with their peculiar idiom. First published in Hindi in 1979, this is a magnificent portrait of India on the brink of its cataclysmic division.

The author was born in 1925. Her first short story Lama was published in 1944. Her early novels Channa (1954) and Dar Se Bichchuri (1958) marked Sobti as one of the voices in contemporary Hindi prose that could not be ignored. She won the Sahitya Akademi Award in 1980 for Zindaginama and in 1996, she was awarded the Sahitya Akademi Fellowship. In 2005, the English translation of her novel Dil-o-Danish won the Hutch-Crossword Award. Neer Kanwal Mani has translated a variety of literary and non-literary texts. Her twelve books in translation include the comic Du-Rex ke Jalwe for United Nations Development Programme, four books from The Chronicles of Narnia series by C.S. Lewis, two novels by Paulo Coelho along with folk narratives and oral epics for IGNCA, New Delhi. She translated Kerstin Ekman’s Blackwater as a part of Indo-Swedish Writers Union Project in 2001-02. Moyna Mazumdar is an editor and occasional translator based out of Kolkata with an interest in literary translation, long walks and cycling.