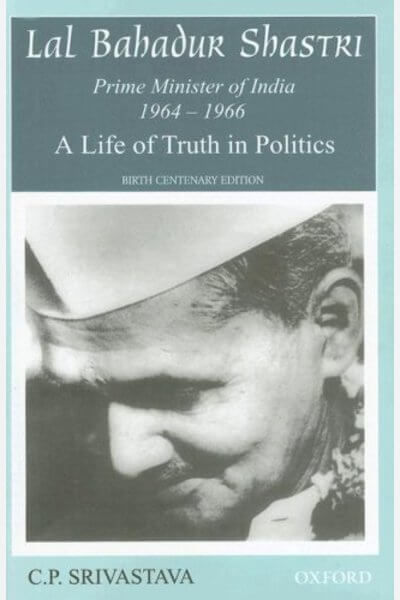 Lal Bahadur Shastri, Prime Minister of India 1964-1966: A Life of Truth in Politics

The life of Lal Bahadur Shastri, India’s second prime minister, is the absorbing saga of a man who, while suffering the rigors of poverty in early life, rose to political eminence on the strength of moral principle.

The life of Lal Bahadur Shastri, India’s second prime minister, is the absorbing saga of a man who, while suffering the rigors of poverty in early life, rose to political eminence on the strength of moral principle. This, marvellous work of true scholarship, is the only book which provides a detailed account of the Tashkent Conference.

The author, formerly of the Indian Administrative Service, served as Shastri’s private secretary when the latter was in the central cabinet as Minister for Transport and Communications, and then for Commerce and Industry. In 1964 he joined Prime Minister Shastri’s secretariat as aide. After Shastri’s death, he served as Chairman and Managing Director of the Shipping Corporation of India and was awarded the Padma Bhushan in 1972. In 1974 he was elected Secretary-General of the International Maritime Organization, United Nations, London, for a four-year term. He was unanimously re-elected for three further terms. On retirement he was designated as Secretary-General Emeritus, the only Indian to have been so honored by the United Nations. He was also Founding Chancellor Emeritus of the World Maritime University, conceived and established by him in 1983 under the auspices of the International Maritime Organization. For his outstanding achievements, the Queen of England conferred a knighthood (KCMG) upon him. Similar national honors have been bestowed upon him by the Kings of Sweden, Norway, and Spain, and by the Presidents of Germany, Poland, Portugal, Brazil, Argentina, Egypt, and other countries.