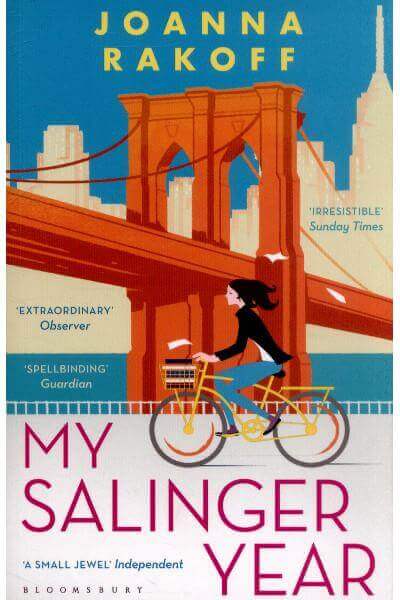 A college grad takes a clerical job working for the literary agent of the renowned, reclusive writer J.D. Salinger

Poignant, keenly observed and irresistibly funny, My Salinger Year is a memoir about literary New York in the late 1990s, a pre-digital world on the cusp of vanishing, where a young woman finds herself swept into one of the last great stories and entangled with one of the last great figures of the century. Above all, it is the coming-of-age story of a talented writer and a testament to the universal power of books to shape our lives.

At twenty-three, after leaving graduate school to pursue her dreams of becoming a poet, Joanna Rakoff moves to New York City and takes a job as assistant to the storied literary agent for J. D. Salinger. She spends her days in the plush, wood-panelled agency, where Dictaphones and typewriters still reign and old-time agents doze at their desks after martini lunches, and at night she goes home to the tiny, threadbare Brooklyn apartment she shares with her socialist boyfriend. Precariously balanced between glamour and poverty, surrounded by titanic personalities and struggling to trust her own artistic sense, Joanna is given the task of answering Salinger’s voluminous fan mail. But as she reads the candid, heart-wrenching letters from his readers around the world, she finds herself unable to type out the agency’s decades-old form response. Instead, drawn inexorably into the emotional world of Salinger’s devotees, she abandons the template and begins writing back. The results are both humorous and moving, as Rakoff, while acting as the great writer’s voice, begins to discover her own.

Joanna Rakoff is a poet and the author of the critically-acclaimed memoir My Salinger Year. She was the recipient of the Goldberg Prize for Fiction and the Elle Readers’ Prize. As a journalist and critic, she has written for the New York Times, the Los Angeles Times, Vogue, Time Out and O: The Oprah Magazine. The BBC produced a radio documentary following her as she tracked down the writer of her favourite Salinger fan letter. She has degrees from Columbia University, University College London and Oberlin College. Joanna Rakoff lives in Cambridge, MA.